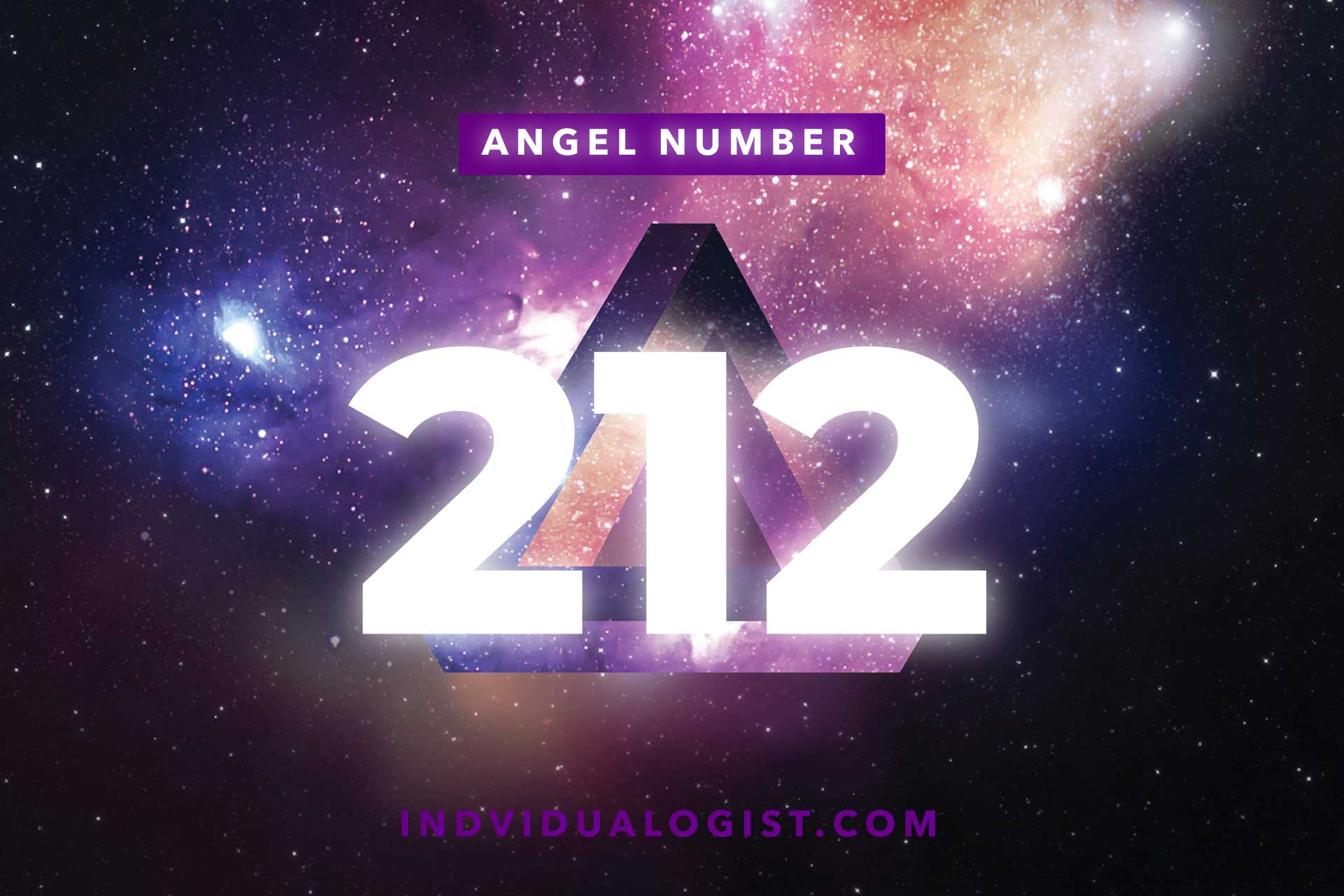 The Real Meaning of Angel Number 212

Because the guardian angels cannot communicate with you directly, they send their messages through special symbols called angel numbers.

If a certain number keeps drawing your attention, perhaps it’s a message from the divine beings.

These numbers appear at critical parts of your life, and each one of them bears a different message.

For now, let’s find out what angel number 212 means.

What is the spiritual meaning of angel number 212?

The spiritual energy of angel number 212 comes from the combination of two powerful angel numbers. What makes the message more powerful is the repetition of angel number 2, a strong indicator that there are some aspects in your life that you need to focus on.

This sacred number puts an emphasis on diplomacy, cooperation, and balance.

The guardian angels are reminding you to treat relationships with respect and tact. Don’t ruin connections by letting your emotions get the best of you.

In the metaphysical sense, it highlights your connection with the Universe. There’s a fragile balance that you need to maintain in order to live a life that’s strongly connected with divine beings.

This sacred number is a sign of fresh starts, new chapters, and a second chance for doing things right. It’s also an affirmation of your skills and traits that are often underappreciated by you.

You’re independent, charismatic, and full of initiative. All these contribute to your natural leadership, which is why people tend to listen to your suggestions and follow suit.

The double appearance of angel number 2 in this sequence emphasizes its influence on the message. Other angel numbers that influence 212 angel number are the sum of its individual digits (2+1+2) which is 5.

Coming together, angel number 212 is a reminder of your freedom of choice, but also your responsibility of maintaining balance in your life. Allow your goals to be the guiding force of your actions, but never forget to uphold your virtues in every decision you make.

Since the divine beings cannot communicate with you face to face, this is one of the best ways for them to show their support.

As lifelong witnesses to your triumphs and pain, they can share the exact things you need at any phase of your journey. Most of which usually go unnoticed, especially when you’re too fixated on the details of what you’re going through.

Because this number has an influence on your relationships, the guardian angels are telling you to evaluate your connection with others. Everyone has something on their plate, but reaching out to your loved ones can be truly helpful in ways you’re not expecting.

By checking in on them, you’re strengthening your bond. Even if you don’t put a lot of thought into these actions, meaningful conversations with your loved ones also help you in many ways.

Though numbers usually have connotations as bearers of good or bad luck, angel numbers are different. They are mere messages from the divine beings, bearers of supernatural wisdom that serve as a reminder that in this life, luck is what you make it.

It’s still good to know the cultural ties for these numbers’ auspiciousness, though. Understanding different traditions open your mind to view the world from other perspectives.

In China, number 2 is a sign of good luck, as even numbers in general. It represents repetition, twins, and being double. As the famous saying goes, “great things come in pairs.”

The double appearance of number 2 in 212 angel number can be viewed as extremely lucky or the opposite. Number 4, the sum of 2 and 2, is arguably the unluckiest number in Asia. Citizens and businesses avoid this number in general.

Next, number 1 is a lucky number.

It’s the winners’ sign. Aside from representing monopoly and power, it also means freshness, rebirth, and unity.

While these connotations are great guides on the auspiciousness relating to angel number 212, the guardian angels are reminding you that ultimately, your luck is linked to your hard work.

The more effort you pour into your goals, the more opportunities will come your way. Sometimes, these opportunities disguise themselves as good luck.

On the contrary, if you continue to live a complacent lifestyle, you’re not bound to attract life-changing experiences too.

What does angel number 212 represent?

As a message from the divine beings, angel number 212 means different things for different people they’re shown to. While some of the meanings may be too straightforward, ponder on the message and try to see it from a different angle.

There are so many things hidden between the lines.

First, angel number 212 is a sign that you need to trust your leadership capabilities more. For most people, standing back and being a follower seems like an easier option, but you can’t stand going with the flow when you know you have more to offer.

When working with other people, don’t be shy in showing initiative on how to change things up for the better. Don’t doubt yourself or your capabilities. Speak up and take the lead.

Second, because the sum of the digits in this sacred sequence is 5, it emphasizes major changes that will lead you to life-altering experiences that will have a huge impact on how you see the world.

Dive headfirst to opportunities for growth. If you take a second to think, anxiety will catch up quickly. The big things in this life are scary, yes, but that doesn’t mean they’re impossible.

Keep in mind that you have everything you need inside you. And in times of confusion, allow the guardian angels to nudge you towards the right path.

Third, 212 angel number is a reminder that humans are social beings. The more you get tangled with responsibilities and work, the less time you get to spend with your loved ones.

From time to time, make the intentional effort of reaching out to others and asking how they’re doing. Just like you, they’re grappling through different challenges as well.

Being there for each other isn’t only helpful when you need support, it also boosts your bond and strengthens your ties.

When it comes to the matters of the heart, there are different messages in 212 angel number that depend on your relationship status.

If you’re in a relationship, the guardian angels are telling you to trust your partner, but don’t disregard your intuition. The balance between both keeps a sound relationship and opens up healthier communication.

Even when tension arises or defenses come up, treat each other with respect. More importantly, solve every issue like a team.

If you are single, enjoy your time alone. There’s a unique opportunity of getting to know yourself on a deeper level that you won’t likely get when you’re in a relationship.

When you’re not in a committed relationship, you’re not tied down to your promise to others. Instead, you have the freedom to explore what you like or don’t like before setting off and finding the great romance of your life.

If you’re not ready for romance, don’t fall into the pressure of being in a relationship. Remember that you’re living your own timeline. Love will find you when you finally open up your heart.

Why do I keep seeing angel number 212?

The mere fact that you’re seeing an angel number, 212 angel number specifically, means that your connection with the Ascended Masters is strong. Not everyone pays attention to their guardian angels, and among those who do, even lesser people put the effort in translating the angel number’s message into their lives.

The appearance of this angel number is a sign that there’s so much of this Universe that’s beyond your grasp. Don’t waste your limited resources on things you can’t change.

Instead, focus your efforts on things that have the potential to contribute to the greater good.

Also, despite your best intentions and hard work, there will be times when things don’t go according to plan. When this happens, keep in mind that it’s not your fault. It’s not that you’re inadequate or incompetent. It just happens, and it doesn’t have anything to do with you.

Continue to strive in becoming the best version of yourself, and know that when you’re in a pinch, you can always count on the guardian angels for help.

Angel number 212 is a special message from the Ascended Masters that bears their wisdom for this stage of your life.

It’s a sign of their massive support for you, especially that they know how great the potential you have in achieving your dreams and making something for yourself.

This sacred number is a sign of the good things in your life, as well as the better things that are about to come in the future. As long as you don’t lose sight of what’s important, you’re on your way to achieving your dreams.