12 Jungian Archetypes in Personality and Psychology

Below you will find the full list of the twelve archetypes of personality, along with a brief description of their typical traits.
Individualogist has developed a method of identifying your personality archetype with a high degree of accuracy through your collective unconscious.

The origins of the word "archetype" can be traced back to the days of ancient Greece, with its definition referring to "original pattern". That definition accurately describes the application of archetypes, as we use it to identify the original patterns of personalities, beliefs, and motivations.

Renowned psychologist Carl Jung first developed the 12 Jungian archetypes as a framework for understanding fundamental human motivations and the operations of the human mind, or what we also know as the human psyche and collective unconscious. Within each archetype lies profound insights into our thoughts, our emotions, and our actions.

The 12 Jungian archetypes are known to conjure a combination of mental images and emotional attachments, with each archetype having its own unique set of personality traits, meanings, and values. It is no wonder that archetypes are used in such a wide variety of applications; literature, mythology, branding, spirituality, psychology, and of course, personality.

With that said, anything that evokes imagery and emotions could be an archetype. However, these imageries and emotions would hold different meanings depending on the individual encountering them in their collective unconscious. That explains why Carl Jung defined only 12 personality archetypes that have remained constant, which we now know as the Jungian archetypes. 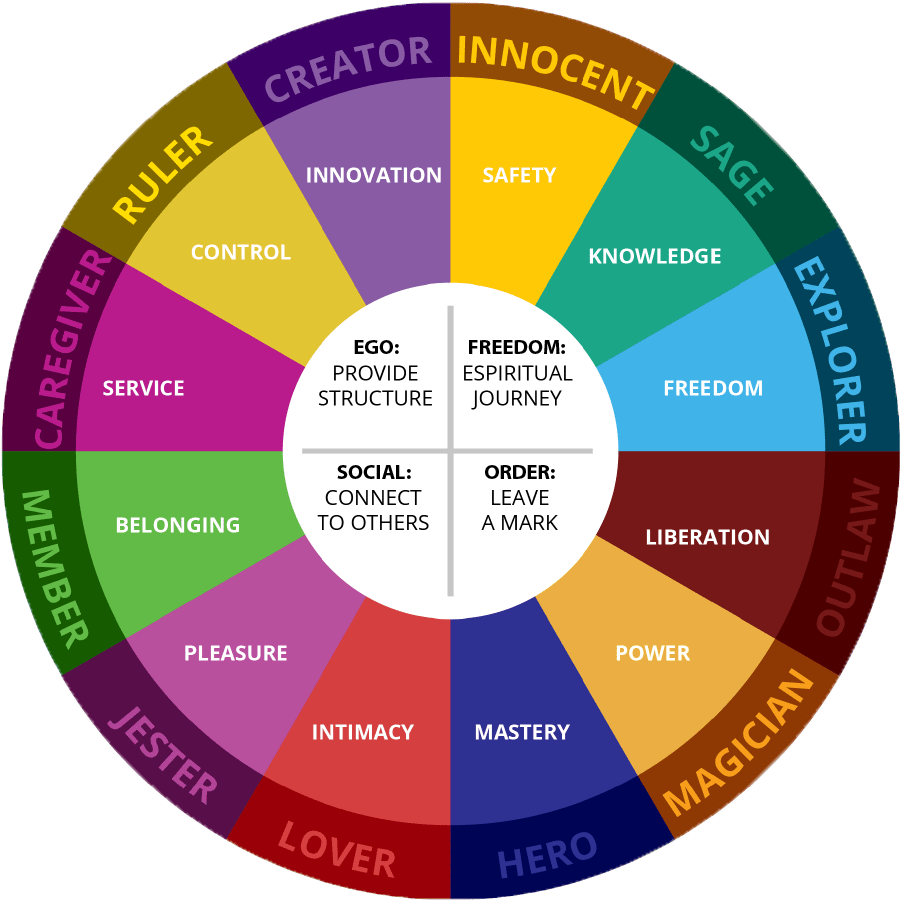 Leaving a mark or making an impact on the world

Providing some form of structure or order to the world

Striving to form intimate connections with others

Yearning to realize its own sense of paradise

How do we experience Jungian archetypes?

We experience the Jungian archetypes as energies. As we have established, archetypes are expressed through intangible elements such as evoking emotions and conjuring imagery - elements that are intangible, but we somehow feel its presence in our collective unconscious. Sometimes we feel overwhelmed with certain energies, but feel unable to accurately describe them.

Whether it’s the Hero’s energies driving us to discipline our minds and go after what we want, or Sage’s energies urging us to ponder upon things at a more profound level, or perhaps the Jester’s energies influencing us to inject humor into serious situations. Don’t we all need to avoid the unintended negative consequences strategy? These are all examples of how we experience Jungian archetypes as energies.

It would be far too simplistic to say that each individual’s personality is merely made up of only one archetype. After all, human beings are far more complex than that when it comes to their collective unconscious. Typically, there can be several archetypes to form the core of our personalities and to develop ordinary solid virtues.

However, only one archetype tends to have the greatest amount of influence or dominance in our personality. It is through identifying our primary personality archetype that we are able to define exactly which archetypal energy is governing our thoughts, feelings, and personalities. By doing that, we open ourselves up to understanding the hidden constructs of psyche and personality.

Here is a detailed overview of the 12 archetypes and their most iconic personality traits and motivations in our collective unconscious:

The Caregiver is a compassionate altruist whose selflessness comes unparalleled in a person’s human psyche. They're always willing to help the people around them, be it friends, strangers, or sometimes even foes. Their generosity inspires everyone around them and fills receivers with an immense amount of gratitude.

Learn More About The Caregiver

The Creator archetype associates itself with being completely and entirely original. Their greatest pride lies in their ability to be creative when it comes to everyday life and achieving the goals that they've set for themselves. Creators are constantly paving ways for others to follow, anything to develop artistic control.

Learn More About The Creator

Think of the Explorer as an adventurer who wants to make his mark in the world and discover new lands. The Explorer archetype has high regard for his or her freedom. Sitting still for even just a short period of time can cause them to feel jittery, uneasy, and restless. They crave adventure and they feed on new experiences involving basic human motivations.

Learn More About The Explorer

This Jungian archetype is known as the Hero. They thrive on bravado and seek every opportunity to display their formidable sense of courage in their human psyche. Individuals who identify with this archetype tend to feel the need to prove their worth by performing courageous acts with their fight talent. It's one of the defining attributes of a typical hero archetype, and what differentiates it from the 12 Jungian archetypes.

Learn More About The Hero

Learn More About The Innocent

The Jester is a jungian archetype that lives for the moment. Nothing pleases them more than experiencing emotions to the maximum. The Jester is the one with an infectious laugh and a bag full of jokes. “Fun” is the Jester's middle name, and it has an insatiable desire for as much of it as possible.

Learn More About The Jester

At first glance, the title “Lover” might come as a surprise to some. However, the Lover archetype is associated less with romance and sexuality and has more to do with commitment and faithfulness. The Lover archetype revolves vastly around emotions, feelings, and sensuality.

Learn More About The Lover

The Magician archetype can be described to be somewhat aloof when it comes to forming personal connections. Their deep connections with the universe make them difficult to understand. Magicians tend to have a strong belief in their dreams, their abilities, and themselves in general.

Learn More About The Magician

The Member is one of the most interesting Jungian archetypes in society. They're essentially the building blocks of this world and are the ones who restore faith in humanity using their vast knowledge of human behavior. One of the most distinct attributes about a Member is his or her ability to blend into any group thinkable.

Learn More About The Member

The Outlaw archetype is best described to be free-minded and free-spirited. Nothing stands in their way and nothing controls their desires with their crime talent. They're the true representation of what it really means to be the captain of your own ship, requiring a lot of psychological development.

Learn More About The Outlaw

Leading is arguably the most distinctive trait of a ruler. While others tend to avoid playing the role of a leader, Rulers are absolutely comfortable with volunteering to take charge. It's important to note that it's not the desire to lead that defines the Ruler archetype, but the actual quality of leadership that they're able to provide.

Learn More About The Ruler

The Sage archetype is highly dedicated when it comes to seeking knowledge and wisdom. If the Sage were a vehicle, then information would be its fuel. Practically everything that they experience in life is a lesson for them, as they're able to identify the obscure meanings behind every event in their lives.

Learn More About The Sage

What To Do Next

We have gone through an exhaustive list of the twelve jungian archetypes, and understood the 4 cardinal orientations. Now what? Well, now that you've been introduced to each of the archetypes, you can use this page as a guide for understanding your own motivations and the motivations of others.

By looking at the 12 archetypes and understanding which particular one dominates our personalities, we begin to realize what is truly important to us, giving us a fighting chance to return to our roots and original callings. We are reminded of our unique purpose, and when we dive even deeper, we begin to understand the direction we must head toward.

Whether it's striving to achieve certain goals you have set out for yourself, knowing why you behave in a certain way when it comes to certain situations, or becoming aware of your emotions, the 12 Jungian archetypes can give you a profound level of self-awareness and self-understanding. But in order to do that, you must first identify your archetype by taking our archetype quiz!

While the names of the Jungian archetypes seem mostly self-explanatory, things grow far more complex when you start to go a little deeper...

Beneath the surface, you'll find some extraordinary traits, attributes, and tendencies that you would never expect.