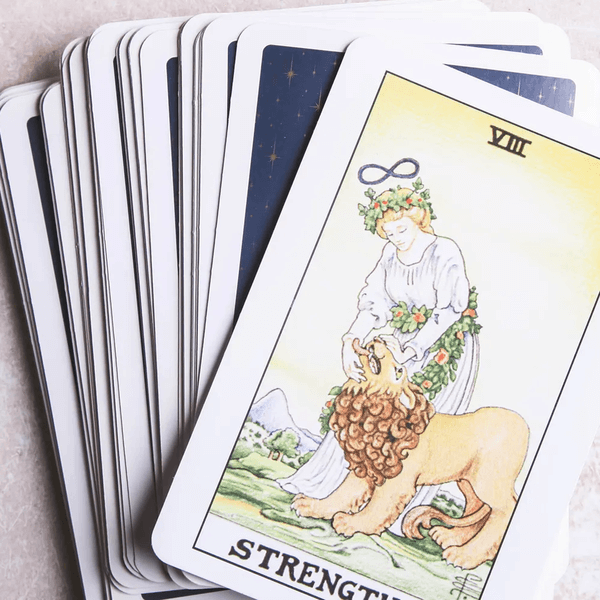 The Egyptian Tarot is a type of Tarot card genre; from the standpoint of esotericism, it is regarded as one of the divine decks and the gateway to all powers and belief systems, and it is deemed the most accurate. Its study entails learning about features, colors, and symbols such as Egyptian hieroglyphs.

The symbols depicted are that of ancient Egypt, which is recognized by those with a basic understanding of the society. The upper section represents an Egyptian divinity, while the lower part is more psychological and spiritual. The bottom section pertains to ancient and exotic symbols that serve to establish the card’s interpretation.

Each arcana contains two main principles: one spiritual and one divine. Each one has information from Egyptian mythology encrypted in esoteric symbols and signs that correspond to certain information and data. The Hebrew letter relating to the knowledge of the Kabala as well as astrological facts are included in the Ancient Egyptian Figures depicted. Curious to know more?

The Origin of Egyptian Tarot

The origins of these cards can be traced back to Ancient Egypt, where they were derived from the “book of Tot.” Tot or Thoth, the Egyptian Deity of Wisdom, bestowed upon his people pages of pure gold papyrus containing the great knowledge of mankind. This treasure was placed in a crate and dropped to the Nile River’s depths.

During 2,600 BC, 78 gold sheets were discovered within a pyramid at Giza, outside of Cairo. Hermes came to be regarded as the manifestation of said God by the great ruler of Egypt. The major arcana are thought to be his creation.

Numerous signs in the Book of Thoth are thought to have come from societies that inhabited the earth nearly eighty millennia ago and left their imprint with these inscriptions. The “Book of Thoth” was composed before Egyptian civilization began.

The entire Universe, the animals, civilizations, the physical, intellectual, and spiritual worlds, the divine, the human, and the cosmic were all condensed in that book. The paintings of the “Book of Thoth” and the engravings of the sphinxes and pyramids are strikingly comparable.

Antoine Court de Gebelin, a French linguist, cleric, and Tarot specialist, claimed that the cards originated in ancient Egypt. Etteila, a Gebelin lover, fortune teller, student of magic, and astrology, claimed that the deck was created by the god Thoth Hermes. Many variants have resulted as a result of this. Margarita Arnal down Moscardo designed one of the most recent, which was released in 1988.

According to Etteila, the book of Thoth was in all men, which comprises the art of living in which the Egyptians delimited all the lights, sciences, physical and moral merits for humankind’s preservation. In Ancient Egypt, a person’s name was far more than just a means of identification.

Because everything in the universe can be reduced to vibration, it is straightforward to reduce a name to a number that corresponds to the major arcana. An individual’s personality and evolution can be defined based on this.

What is the Egyptian Tarot and how does it work?

The Egyptian Tarot cards are renowned throughout history as the first cards designed with the ability of prophecy; they imply that this tarot was acquired from the book Thot, thought to be the God of wisdom. Because they are regarded as holy cards, Egyptian tarot readings are thought to be more realistic and accurate than any other reading.

You should understand the layout of the cards that comprise this tarot, which consists of 78 cards in total, 56 of which symbolize situations from one’s own life and are part of the Minor Arcana.

The Major Arcana consists of 22 cards which are defined by the following Designations:

How to read the Egyptian Tarot Decks/Tarot Cards

It is crucial to recognize that Egyptian hieroglyphs are distinguished by their wisdom and accuracy in what they convey; whoever studies these letters must grasp exceedingly complicated images and symbols.

The following is a representation of the significance of the cards in the tarot deck:

How to use the Egyptian Tarot Deck

Reading these cards does not necessitate the study of sophisticated esoteric systems. Instead, make a promise to yourself to keep things simple. Stick to simple definitions, concepts, and procedures. When you keep it simple, your confidence will skyrocket.

Step #2: Develop a Personal Relationship with the Cards

Rather than attempting to understand everything, there is to know about the Egyptian gods or sites shown in the cards, concentrate on your instinctive connection with them. Begin connecting to them on a more personal level.

Make it your own!

Use basic 1-3 card Tarot spreads instead of a 10-card spread (also known as a Celtic Cross Tarot spread). Let yourself be delightfully astonished by how much information you may gather from even a single card reading. Here are some recommended 3-card layouts if you want to expand on a 1-card reading:

Drawing a card a day is the greatest method to learn Tarot and develop a personal relationship with your Egyptian Deck. Every day, ask the Tarot, “What energy would I need to concentrate on today?” Then, using that card as a catapult, purposefully manifest that energy during the day. Alternatively, inquire, “What might I encounter today?”

By the end of the day, compare what happened during the day to what you know about the Tarot card you selected. If you can’t uncover a link through intuitive means, you could go online to study more about the preferred Egyptian deity, region, or archetype. Your knowledge, experiences, and connections with the Tarot will grow and grow over time.

Step #5: Inspect the Image on the Card

Looking at the image of a Tarot card is one of the simplest methods to grasp what it means. What’s going on? What is the cause of this? Make up a tale based on what you see in the photo. What is the tale that you wish to tell? Then connect that to what you’re going through.

What might the card’s story teach you about your life at the moment? What lessons can you pick up? The nicest part about this method is that you shouldn’t have to remember certain interpretations! You might merely go by what you see in the image and the tale that comes to mind every occasion.

Step #6: Listen to and Trust Your Intuition

I understand that for many people, this is easier than it sounds. Amateurs often struggle with understanding when and how to listen to their instincts. What is my advice? Set down the books, stop searching for more knowledge, and just absorb the energy in front of you, as we did when we visited each Egyptian Temple.

Step #7: Tarot Reading for Yourself

Disregard anyone who tells you that you can’t interpret Tarot cards for yourself. It is an extremely effective tool for personal growth and self-discovery. So, put it to good use. Set aside some time every day to draw a card or do a quick reading for yourself.

Everybody sees the Tarot cards in a different light. So, if you’re curious to learn more about these Egyptian tarot decks, locate a study partner and try grasping the cards alongside each other. To draw cards for one another, contact your companion or a new buddy from the trip. Then spread the word, your various viewpoints as you help each other grow.

Step #9: Master at least two themes for every card

The use of these cards should be pleasurable and enlightening, not frustrating. Take it slowly at first. Begin by memorizing 2-3 keynotes for every card. As a starting point, consult the following reference sheet. If you would like to go further, write a little bit about every card and its tale as you draw it.

Step #10: Forget about the rules

Let yourself let go of all the recently learned Tarot rules if you already have your tarot decks. Allow your new number one rule to be, “There are NO RULES!” How do you like to put your cards to use? Would you like to add additional images from your Egypt journey to the deck? What are the holy and significant occasions in your life? What are your interpretations of the occurrences?

Step #11: Learn What the Tarot Signifies to You

Among the most beneficial activities, you can perform before utilizing your Egyptian Tarot Cards is to ask yourself, “How does Tarot work?” By pondering on this question and developing your response, you’ll have a far better understanding of what the Tarot represents to you and how to use this instrument to its full potential.

Everyone will have a different answer with that Ancient Egyptian Art. You might consider the Tarot to be a forecasting tool, a teaching tool, or a fun method to dazzle your friends. Once you’ve determined your solution, write it down, say it aloud, or post it. In other words, figure out what it signifies to you personally, because that’s what’s most important.

Step #12: Use the Tarot with Caution

One of the most common mistakes that novices make while interpreting for themselves is asking a similar question repetitively, hoping for a better response each session. Because they do a reading when they are overly emotional or too shut down to hear accurate information.

Hence, approach your Egyptian Tarot Cards with caution. Allow yourself sufficient time and space to properly accept the insight that is being presented. Once you have an open mind and heart, you can draw from the cards. This can be accomplished by doing the Illumined Heart-Mind Breath before drawing cards.

What interests you most about the Egyptian Tarot Cards?