Discover what ace of wands tarot card symbolizes based on its upright and reversed positions.

You have reached the Ace of Wands. This mighty card, truly worthy of its title, represents opportunity and ability together.

In it, you’ll see a gigantic, almost godlike hand reaching out from the clouds, holding one mighty wand. The hand glows and the wand is upright, showing an almost mystical affirmation of whatever ambition you may have right now.

The auspicious omen that drives this card is further exemplified by the elegant firmness in which the hand holds the wand: the fingers are tightly packed, and the thumb is at a vertical position indicating both a sense of approval and a firm resolve. From the wand, you’ll also see leaves falling all the way to the very bottom, which is filled with greenery, suggesting further the birth of a new chapter in one’s life.

In the distance, one can see mountains and a castle. From the perspective of the one viewing the card, this means reaching the safest possible haven: an end goal which cements the glory of what is to become a truly great triumph.

Seeing this therefore means that your cause is not only favoured by fate, you have the ability to see things through. On this note, we have but one thing to say: Carpe diem! 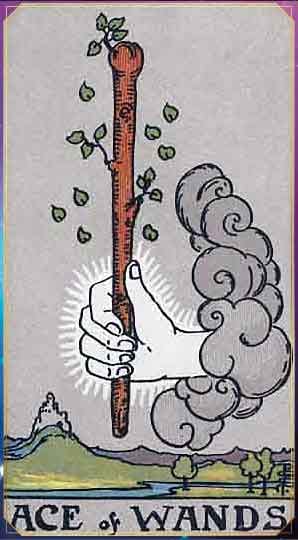 If you’re getting this, then this is certainly good news. You’re most likely still thinking about the monotony and the struggle of solving a grand project, but as this card will tell you, you’re close and you just don’t know it yet.

You’re about to make a significant breakthrough, overcome a key obstacle and finally reach your projected goals in the days to come. Of course, this means there’s still more work to be done, but you can rest assured that with sustained effort and level of work, you’ll definitely reach your highest aspirations.

Good things await for those who see the Ace of Wands in its optimal position, as it means that the two of you are fated to be with each other. Your relationship radiates life and beauty, and the both of you are inspirations to the people around you.

To some, it may even seem like you have the blessing of the heavens, and all that’s left is for you to finally seal it with a marriage. Due to this, this card is also viewed as confirmation to proceed with the next milestone.

Take the next step without delay!

Being the penultimate symbol of strength and personal power, the Ace of Wands in the upright position is as wonderful in its omen as its imagery suggests. All of this means that you have sufficient wherewithal to proceed with all of your desired goals in life simultaneously.

With this card’s blessing, you can call on your friends to make a brand new contribution to the free market, while still pursuing your side passions-- or even make a career of them outright. Wanna work and play in a band on your days off? This is the card for you.

Getting this outcome typically indicates a setback or a bump on your path to victory. It’s possible that you’re doing everything right, that everything is going right and well, but something could very well still go wrong.

It’s tough to act on something you’ve yet to know, but this is where planning and pause come in. You’ve come far with your effort and dedication, but now might be a good time to plan for contingencies.

Not everything in life works out the way we want, so you need to make sure you can mitigate the damage when it comes. Victory will still come to you, but only with sufficient preparation, so hang in there!

A significant hurdle is forthcoming with the reversed Ace of Wands and it will test your relationship without mercy. It doesn’t necessarily mean that you two are not meant for one another, or that you shouldn’t marry, but because love works in such mysterious ways, Tarot readings can never rule out the possibility of disaster.

However, you can interpret this in a positive way, too: if you and your partner somehow make it through life’s harshest tests, then it’s perfect confirmation for the two of you to finally be with each other.

Contrary to popular belief, there is a positive side to the seemingly negative implications of the reversed Ace of Wands. While it suggests that not everything is on your side right now, it reminds you of the power of prudence, which in many ways trumps even the surety that other upright cards provide.

Sometimes, it is better to be wise than to be free, because your sense of freedom can make you spend irrationally, while being wise means you can go around financial impediments, making you better in general with money. In that sense, this is still a good card.