Discover what death tarot card symbolizes based on its upright and reversed positions.

Death implies new beginnings and the significance of letting go and moving forward. It symbolizes change and how essential it is in getting away from bad and unpleasant experiences.

It is a natural and normal phenomenon which every individual is bound to encounter. The acceptance of this transformation may be painful and difficult at first but sooner or later, you will realize that it is not a bad thing.

You will eventually learn that it will be good and beneficial for you. The figure of the death portrays a skeleton man riding on a white horse.

He wears a protective piece of armor that represents strength and indomitability. It connotes that he is invincible and that no one can defeat and destroy him.

His act of riding on the horse epitomizes purity and how he cleanses anyone that he will be encountering along the way. 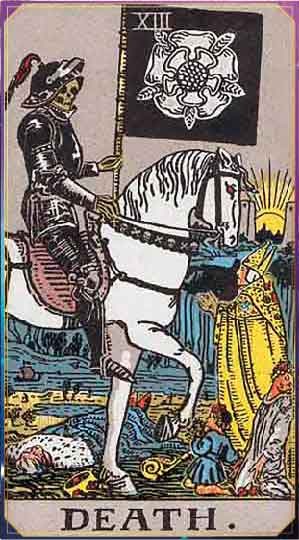 The presence of the death card may be frightening and daunting at first but it is not always a scary thing. Oftentimes, its position Card in Upright means that you will be undergoing some changes or transformation that will be very helpful and advantageous for you.

It is the universe’s way of sparing you from dreadful and disheartening encounters and will help you unload some unnecessary baggage. These changes may be difficult to accept but it will always be worth it in the end.

The difficulty of getting this card within romance is that it’s a very difficult card to put a positive spin on. Ironically, this is what makes the Death card such an important piece: because sometimes the truth is best served cold and real.

Like Death, the revelations will come in a swift but sure manner. Bear in mind that most of the things that you will know will cause you pain.

As such, you have to be emotionally ready for whatever comes next. These things that you will come to know will soon have you confront all sorts of trouble in your relationship.

Whatever these will be will surely break you from inside and out, making you face whether whatever you have right now is still worth a redemption arc. In love, death can mean many things; perhaps the relationship is too unsustainable for any meaningful reform, or that it’s time to kill whatever negative habits you have to keep things going.

At any rate, you need to ask yourself the hard questions because you may have been doing things wrong all this time. If you genuinely want to fight for your relationship with your significant other, then you shouldn’t just do band-aid solutions.

You need to do a life-saving surgery that would require you to make many sacrifices. Otherwise, it would be best that the two of you let go.

For those who are single, this card merely tells you to avoid relationships for now. It isn’t a good time, and there’s no need to rush.

As dark as this may sound, it is a fact of life that death often represents opportunity, and in finance, this is especially important. For example, if you know a business that has just recently failed, you may look at the causes of their failure to ensure you won’t be going down that road yourself.

Often, these causes may be obvious, especially to those who have a keen eye for business. Sometimes, though, it will help if you do some digging to understand the whole picture.

After all, some things are built on the ashes of their predecessors. The same concept applies if you’re necessarily into business but still want to expand on your career.

As the opportunities start to unfold before your very eyes, be wary of the mistakes done by those who came before you. Sooner or later, you might find yourself in a similar situation as them, and you have to know what’s the best course of action.

It also means that a change in your existing habits must happen in order for you to move forward in life: if you’re spending too much on petty indulgences now, cut back on them so you can think about the future! Remember that letting go of bad habits is often the key to lasting success. Death doesn’t necessarily mean that nothing will come next but is often a sign of a more radical transformation in your life.

However, this change will only happen if you are finally ready to accept and live with it.

It may indicate resistance and uncertainty towards change. It may mean that there is a compelling need to undergo through it but you are doubtful and unsure about its consequences.

It may be hard to let go of the past but it will be essential in order to move forward. So, do not hesitate in embracing and accepting it.

Take the first step and be brave enough to make the next pace. Always remember that you are a work in progress.

Love is still salvageable if you get Death Card in Upright, but if it’s Card in Reverse, then you will certainly need to face the truth. At this point, your relationship with your partner is doomed to fail.

You’ve tried every avenue, every conceivable plan of action to make things work, but there are just some things which you can’t prevent-- just like death itself. There is still room for you to enjoy your relationship, of course, but do not become too attached, because doing so could mean your own personal destruction when things finally end.

If you happen to pull this card early on in your relationship, it would be best to talk things over with your significant other. You have to decide if you are still going to proceed with everything, even though your relationship will fail, one way or another.

But if you already forged a strong bond with your partner and you’ve been together a long time before you drawing out the reversed Death card, then it is time for you to face the consequences. The heartache and heartbreak will be unlike anything you’ve ever experienced before.

As for the singles, this might be the sign that you are fated to live a life of single blessedness. It is time to make peace with yourself and that some things are just not meant to be.

Who knows, you might come to the peak of your success even without getting yourself romantically involved.

One should not dwell on things long past, and in wealth, this makes the Death Card in Reverse such a powerful card. Thinking fondly of the glory days is often a good way to loosen up, but do not make it your life’s mission to reenact the past.

What matters now is your present and what you can do to further improve upon your future. You can no longer go back to your past, thus wallowing in it won’t do you any good.

The best you can do about it is to find lessons which you can apply in your life today. If you were fired from a job, don’t dwell on it and instead focus on improving your work ethic.

Use your past mistakes as a driver for victory, and you will find yourself winning on the financial front every single time. People aren’t static, so you must make the most out of every success and failure you experience.

The insight you may gain after such horrible events may prove to be precisely what you need for you to achieve the things that you’ve always wanted. The road to victory isn’t pretty.

What you are experiencing right now is simply a stepping stone towards attaining greatness in whatever it is that you do. Once you finally emerged from the chaos of your current situation, only then will you realize the transformation that your experiences have done to you.

Bear this in mind and all will be well.