Discover what queen of swords tarot card symbolizes based on its upright and reversed positions.

The Queen of Swords is an epitome of an independent, strong-willed and mature individual. It represents self-sufficiency and freedom from unnecessary control, emphasizing the need to value independence in making decisions and judgments.

It also stands for an intelligent and brilliant person who is most likely a teacher or a mentor, prepared and equipped to impart life-lessons to others. This card is portrayed through a regal and noble queen sitting on a majestic throne in the milieu of clouds.

She gazes from afar while holding a sword pointing upwards, representing her designation as the Queen of the air element. On her left hand, it can be inferred that she is trying to propose or suggest something to others.

She seems to be offering his valuable knowledge and experiences to people needing support and guidance in formulating decisions. 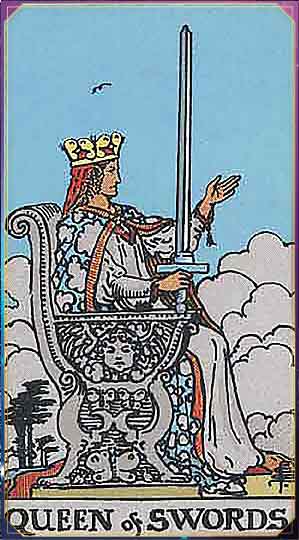 The Queen of Swords Card in Upright characterizes an individual who is full of substance, conviction and brilliance. She is regarded as the most masculine among the deck of queens due to her firm, disciplined and authoritative stance.

She encourages people to integrate intellect and reason in the decision-making process and to not fully rely on emotion and instinct. She believes that the facts and the possible consequences of every option must be carefully thought of in order to lessen or avoid the risk of committing mistakes.

Furthermore, it also inspires everyone to be impartial and independent in making decisions. Judgments must not be based on bias or illogical reasons nor be bound completely by redundant feelings and emotions.

In order to make the right pronouncement, it would be best if you would rationalize and understand the possible effects of every choice and how it will affect your future.

For couples, getting the Queen of Swords in the upright position is a good sign of conversational ability and lasting feelings. Both of you are never bored of each other.

On the contrary, you seem to always be able to find ways to spice things up and keep the relationship interesting and fruitful. You have good sex, you never run out of topics and you keep each other laughing, making your relationship airtight and strong.

Really, the only thing you have to watch out for is if you invest too much time on each other that you ignore everything else.

The Queen of Swords represents the protective side of maternity. It isn’t just about nurturing bonds, it’s also about taking on aggressive tactics if it means keeping the team together.

In terms of wealth and career, this is an important trait to have, because you are the glue that holds a dysfunctional team together. This allows you to increase productivity, and if you’re already eyeing managerial positions or a raise, this increases your chance of getting noticed.

You are also protective of your finances, so you’re definitely going to be stable later.

You may have become too subjective and emotional when confronted with the need to make decisions. There are times when you fail to consider what your mind or intellect says and you deliberate each choice through your mood and intuition.

It is now high time for you to be more objective in expressing judgments and to inculcate critical thinking in contemplating or reflecting about it. The Queen of Swords Card in Reverse may also imply that you have become bitter, stern and cruel towards others.

You may be showing a toxic or manipulative trait to your love partner, friend or co-worker and this somewhat alters the harmonious and peaceful relationship you once nurtured.

In its reverse, the Queen of Swords symbolizes a lack of confidence and a degree of listlessness. You don’t quite know where your relationship is going, and you seem to be too preoccupied with what your person of interest that you’re ignoring yourself.

This is bad because relationships can only exist if the two of you are completely ready. Being worried about how you look or what your partner thinks of you to such degrees could end up damaging the love you have for one another.

To deal with this means dealing with your personal insecurities.

This outcome represents a tendency to be neglectful and procrastinate, which is disastrous especially if you’re looking to line your pockets with coins and paper. Procrastination, for one, kills your capacity to use time productively, causing you to be relaxed and then panic when you run out of time to meet your goals, lowering your quality of output.

Sometimes, you may even neglect things entirely, which could make you unpopular especially if you have teammates relying on you. If you’re in such roles, remember that people look up to you.

Reciprocate that by looking after them.