Discover what ten of swords tarot card symbolizes based on its upright and reversed positions.

When the Ten of Swords strikes its presence, there is an expectation of failure, loss and disaster. It speaks of an unavoidable catastrophe and harm that will put one’s strength and character into test.

Its inevitable nature will frighten and intimidate a person’s temperament but by possessing a strong mind and heart, it is not impossible to survive from the tremors and hazards that it gives. In this card, a figure of a man can be seen lying down on the ground.

His body is draped in a red piece of clothing and his face is smudged in a pond of dirt. Ten sharp swords can be observed pierced on his back and he seems to be unaware of the treacherous act committed against him.

It happened while the world around him is motionless and stationary. The sky above him is covered with black clouds while the waters in his façade are incapable of flowing and rippling.

It represents the terror and dread that is greatly linked to death and loss. 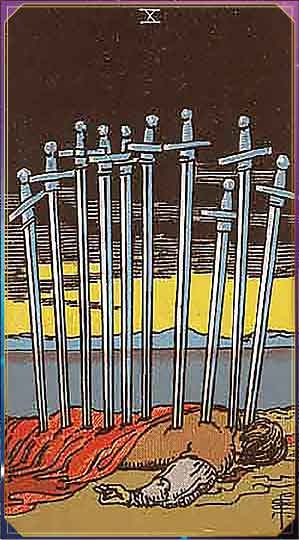 The Ten of Swords Card in Upright indicates the possibility of a tragedy, catastrophe or exhaustion. Its magnitude and extent may be massive and daunting but when you put your entire focus and attention in overcoming it, there is an opportunity for success and triumph.

The fact that the man in the card is stabbed in the back implies that you may experience betrayal and disloyalty at an unexpected time. You have to accept the truth that you cannot have complete control on everything and that full dominion over the inevitable is not feasible.

It may also imply a difficult situation of being stuck and trapped in the confines of failure. Always remember that when a door closes, another one opens its way.

You have to let go of the bitterness and disappointments of the past and be optimistic about what the future will hold.

The omen forwarded by the Ten of Swords is as grim as the image drawn on it, especially in relationships. As the card suggests with its symbolism, your relationship may the unfortunate subject of a future betrayal, and you are bound to feel its full impact.

The coming days will definitely test your character, fortitude and your ability to tolerate pain. In all possibility, your relationship could still recover from the blow, but the strength required for it should be far greater than whatever is coming to break it.

You will be tested as a couple, so prepare yourselves accordingly.

The omens are not favorable for you at the moment, especially because this card in its upright position. Having this outcome means you’re about to suffer a great betrayal of trust which could translate into less productivity and earnings for your entire team, or a falling out with a business partner.

At present, there may not be signs, but you may need to start being observant and look for the cause of the problem. More importantly, don’t rule yourself out, because sometimes the problem may lie in your leadership.

Carefully monitor the situation to prepare yourself.

The Ten of Swords Card in Reverse may imply survival, recovery and improvement. You have gone through the lowest phase of your life and there is nothing for you to lose anymore.

There is now an opportunity for you to start life with a clean slate and to be hopeful and positive about all the beautiful things that are capable of unfolding. Grab this opportunity in taking responsibility of the consequences of your actions and in rectifying and fixing your past mistakes.

Having this in the reverse position means that your relationship will be on the mend. In particular, if you had a recent fight with your significant other, or if they have lingering suspicions of your character as a result of past arguments, then you can rest well because they’re all going away soon.

Granted, this also means you will need to make the necessary move. For one, go to them and apologize dearly for any failings, and more importantly, swear to never fail their trust again.

Relationships thrive on mutual trust, and fixing yours means reassuring one another.

A reversal of the Ten of Swords is a reversal of your ill fortunes. As of now, your business is probably recovering and even booming after months of relative stagnation.

In fact, you may start seeing more growth as you make more branches, in turn giving more job opportunities for others. If you’re a prospective employee, this card is also good, because this means more potential jobs and more sources of income.

At this point, if you are feeling down, take heart because life’s blessings are coming. Ready your resume so you can get moving again!.