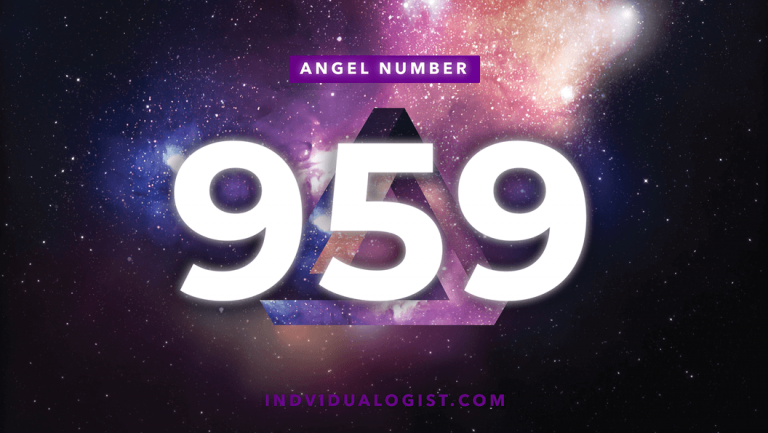 Though the divine beings cannot talk to you directly, they send universal symbols that carry their messages.

If you keep seeing a certain number over and over, that’s it. They’re called angel numbers.

Each angel number has a special meaning, but the angels only send the most appropriate one for your situation.
The appearance of angel number 959 in your daily life is not a coincidence.

What does it mean and how can it help you?

What is the spiritual meaning of this angel number?

When two single-digit angel numbers combine, they create a more situation-specific message from the guardian angels.

In this case, angel numbers 9 and 5 come together to lay the foundations for angel number 959. But before you understand its full message, it’s important to look into its individual parts first.

First, angel number 9 is a sign of lightwork and spiritual maturity. Being repeated twice means doubling down on its influence on the entire sequence.

Since it has the last ordinal rank among single-digit numbers, it also signifies closures and endings.

Second, angel number 5 signifies positive change. It encourages you to dive deep into uncomfortable life experiences not only to grow stronger, but also to be more open-minded.

Also, this angel number urges you to be more flexible with your plans. There are many ways to reach your goals, and what’s in store for you may be way better than what you originally thought.

Putting them all together, 959 angel number’s spiritual message focuses on a transition.

As a chapter of your life is about to close, it’s also preparing space for a new place wherein your skills can truly shine.

This accompanies changes that can be difficult to grapple with your strength alone. In the next few days, you’ll need the help of the guardian angels the most.

Continue to cultivate your spiritual connection with them and they will continue to show you more signs in the future.

Angel number 959 comes from the Ascended Masters’ altruistic intention to help you make sense of everything that’s happening at once.

This sacred number is a sign of your depth. Not only do you have an established relationship with the guardian angels, but you’re also called to share your light with those in need.

Did you know that you need to have a pure heart and strong intuition to pursue lightworking?

The fact that this angel number is appearing everywhere is an affirmation of your altruism.

You help people without them asking you to.

If there’s someone in need of an outreach volunteer, you’d be the first one to raise your hand.

More importantly, you’re willing to sacrifice an important part of yourself as long as it could help others.

This is part of what makes you special.

It’s your strength, but at the same time, it can also be your biggest vulnerability.

Angel number 959 is a sign for you to be more watchful of your back.

Some people will try to take advantage of your kindness.

They’ll come to you as a friend, but with the intention of using your company for their benefit.

This is to say that you should watch your back. The guardian angels may drop signs, but only you have the power to control your emotions.

Even if no angel number will tell you whether you’ll win the lottery next week, their mere appearance can be lucky.

Out of all the people in the world, the guardian angels chose you as the human who will see angel number 959.

More importantly, it’s because they believe that you have the ability to create your own luck.

No matter what the older generations say about the auspiciousness of 9, 5, or 959, if you want to make 959 angel number’s appearance a sign of good luck, it will be.

On the flip side, if you’ve been sabotaging your path to success, the appearance of this sacred number is also a bad omen.

Don’t glue your mind to your notions of how things should work.

Not everything will go according to your plan — and that’s normal.

Every turn contributes to where you should be headed in the grand scheme of things. And until you get there, it will be hard to process why your “foolproof” plans fired back.

Instead, open your mind. Widen your perspective.

There are so many things that you need to learn. You wouldn’t find a more sensible way to reach your goals if you only stick to what you know.

What does angel number 959 represent?

Angel number 959’s meanings are peppered with implications that you need to read between the lines.

As a message from the guardian angels, you should know that behind what’s obvious, there’s a special part that speaks to you alone.

Since this number is a symbol of lightwork, the guardian angels are reminding you to balance your compassion between other people and yourself.

Altruism is in your nature. It’s part of your purpose.

This is all the more reason why it’s understandable that you put so much weight into helping other people.

But keep in mind that you’re also a person.

You’re not called to carry the weight of the world.

Spreading yourself thin will only hurt you in the long run.

Second, 959 angel number means the coming changes will shift the tides towards your purpose.

If you’ve been thinking about changing your career to one that is in service to others, there’s no more perfect time to do it than now.

You’re one to devote yourself to humanitarian causes, so why don’t you make a career out of it?

Test the waters by spending your weekends doing outreach activities. Or, you can even challenge yourself by organizing one!

The guardian angels are assuring you that the upcoming changes are going to work out for your own good.

They’re witnesses to how you struggled to get where you are, and you deserve better things.

Angel number 959 is a testament of their support.

Angel number 959’s influence on the matters of the heart shouldn’t be disregarded.

It can be difficult to entertain the idea of changes, whether you’re in a relationship or not.

The idea that you’re going to face the unknown when it comes to love can be nerve-wracking, especially if your relationship is already going through rough patches.

If that’s the case, perhaps you can use this time to evaluate how to save the relationship, and more importantly, if there’s still anything worth salvaging.

Changes will provide space for you to show and meet another side of yourself and your partner. It’s a nice way to break the routine and strengthen your bond with each other.

If you’re thinking of taking things higher, make sure that you’re both on the same page first. Tie the knot, move in together, or start a family — life is insanely better when you have someone you love by your side.

As a lightworker, you’re used to being on the giving end of the relationship.

One challenge that 959 angel number brings is for you to accept the efforts of love as well. Let your partner shower their affection on you without the expectations of having to do the same thing back.

Now, learn the part of taking.

Why do I keep seeing angel number 959?

At one point in time, you uttered a prayer for the divine beings to give you clarity on what you’re going through.

The appearance of angel number 959 is the answer.

Your ability to see this angel number affirms your strong spiritual connection to the guardian angels, and it allows them to continually send you messages.

As you continue to follow your spiritual path, make the effort to keep this connection strong.

Life is easier when you heed their guidance.

So, as everything starts to move, don’t get caught up in your current affairs.

Be open to where the changes will take you. And more importantly, be proactive in making changes for yourself too.

One of the best kinds of help that you can do to others is to walk the talk.

Live your best life by choosing to do good every day. Help yourself when you fall down, and rise up stronger than ever.

You might not know it but you inspire people to be more confident.

And the hard truth about helping others is some people just refuse your offer. They’re content with how they live, and there’s nothing you can do about it.

Focus your energy on those who accept it. They’re the ones whose lives you change.

Angel number 959 carries a unique message from the guardian angels.

It’s a reminder on the things you should look out for, relationships you have to let go, and what you should do in the face of change.

As a lightworker, your path is set to be special.

Make use of this opportunity to help as many people as you can, but as always, don’t go overboard.

What do you think of angel number 959’s meaning?