Discover what five of cups tarot card symbolizes based on its upright and reversed positions.

The Five of Cups carries with it a feeling of sadness, grief and disappointment. It symbolizes loss and the hardship, frustration and sorrow you experience in coping or dealing with it.

It connotes a painful and morbid emotion that is felt when you lose a significant person or thing in your life. It also stands for regrets, doubts, avoidance and desolation.

The card is portrayed through a figure of a person dressed in a black coat. He seems to be covering his face from the world due to the despair and misery that he is experiencing.

Five golden cups can be found surrounding him but three of them fell on the ground. He appears to have not noticed the two cups standing at his back because he was too engrossed in weeping for those who fell.

Also, a river and a castle can be seen in the background, representing the gush of negative emotions felt by being away from home. 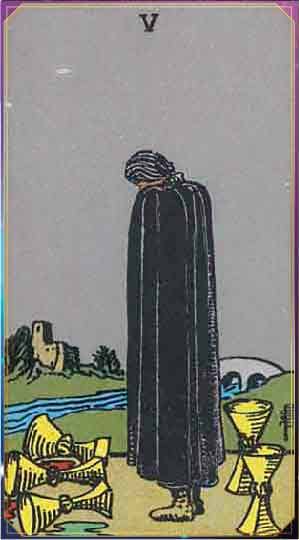 You are placed in an unhappy situation and you seemed to be really upset about it. You are so consumed by the feeling of frustration because things did not happen in the way you want it to be.

You are indulging yourself in failure and resentment because you believed that all of your efforts were hastily put in vain. There is difficulty in moving forward because you are too attached on the bad things that occurred in the past.

Also, the Five of Cups Card in Upright also suggests that you are experiencing difficulty in letting go of these negative thoughts. You are overly stuck in these mistakes and you do not have the strength to break its strong chains.

If you continue to drown yourself in these emotions, you will never experience happiness and fulfillment in this world.

In all romantic relationships, precedent often sets the tone for many others. This is especially true of the Five of Cups, which symbolizes sadness, pain, and an immense sense of desolation.

Love was never meant to hurt, but sometimes people act wrongly because of it. Some people often get sidetracked and blinded, believing that they are still doing the right thing.

This twists the idea of love that is supposed to be kind, comforting, and compassionate no matter what. However, it isn’t all that bad.

The betrayal of a loved one can make it very difficult for you to commit yourself again, but this is an indication of growing caution and judiciousness. Betrayals are never pretty, but they often point out to us who are the real ones.

Forgiving those who have wronged you, though, is something that you are highly encouraged to do.  This way, the emotional burdens will gradually lift themselves, and you would be able to find your way back to love again.

It does not mean, though, that you should allow those who hurt you to remain in your life. The choice to do that will always be yours.

Ironically enough, this makes the card a positive one in its own right, because it’s giving you the chance to honestly reflect on past mistakes and being a much better human being. As you learn from your mistakes and others, you will gradually see why your past relationships failed and what you should improve on.

With the Five of Cups in the upright position, this means that right now, you’re going through significant emotional pain due to the loss of certain prospects. Perhaps your business has gone bankrupt, or that you just lost your job, and it’s making you anxious about what to do next, especially financially.

However, contrary to the card’s seemingly negative imagery, it actually only tells you to just release your pain, because letting go is a great way to bounce back and succeed later. Allow yourself to cry and mourn for the things you worked hard for but still had to let go.

While being emotional won’t bring back anything that you’ve lost, it will certainly help you heal faster. Take care, though, that you don’t wallow too much in self-pity, or else you will be distracted from regaining what you have lost.

After giving yourself ample time to allow things to sink in, be ready to make your comeback. The road ahead won’t be an easy one, but it will undoubtedly be far more bearable now that you know you already are a veteran in your field and thus know your way around.

Maximize on the things that you know you can use to regain what you have once lost. Connections, credentials, and skills will be your keys to achieving success.

Once you have utilized these things properly, you will soon taste victory and financial security once more.

The Five of Cups Card in Reverse signifies that you have survived this particular storm in your life. It implies that you have experienced recovery from the pain and anguish brought about by such loss.

You have now accepted the fact that it happened in your life and made you unhappy and miserable. You see it as a blessing in disguise because it taught you so many valuable lessons and realizations.

You are grateful about it because it made you strong and resilient. With these experiences, you believe in yourself that you can survive another wave of problems and challenges.