Discover what five of pentacles tarot card symbolizes based on its upright and reversed positions.

There are two ways to view the Five of Pentacles based on its primary symbolism. On the one hand, you have two people walking together, seemingly bogged down and defeated by both exhaustion and the winter.

At the top, you can see what seems to be a monastery’s window decorated by five of the pentacles with the Latin “V” symbol cleverly hidden. This suggests a sense of helplessness, in that they tread an endless snow while barely able to carry themselves, but this could also mean determination and faith, in that despite the obstacle, they choose to march on, with the House of God carefully guiding their every step.

The beautiful dynamic between these two interpretations represent the fullness of human life. It shows both the darker sides of hard work -- depression, stress and fatigue, as well as its lighter side -- strength, fortitude and faith.

More than that, however, it shows you how the latter can make a person exceed their limits and still march beyond their physical strength through the religious imagery. This encouraging image of God silently paving the way for these pilgrims of the cold fills you with both awe and dread, but also joy: that you are not alone in the weight of your own problems. 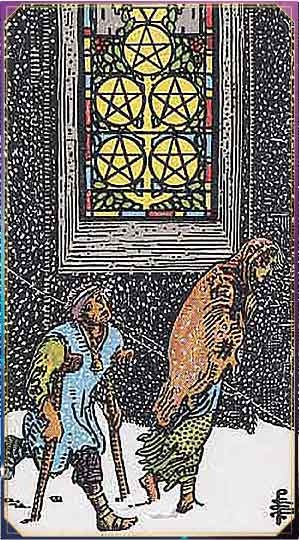 This card shows through its upright position the very strength of human bonds and camaraderie. The people in the picture may be tired and close to beaten, and yet they still find the desire to keep on marching: this rare ability to break one’s limits is usually only possible through the help of really good friends.

Similarly, you may be going through very rough patches in your life right now, but because of the upright position, you can count on your friends being there to help you get through it. So if you’re looking for a way out of a tough bind, don’t be afraid to tap into your connections.

This particular position of the Five of Pentacles represents a burden that you two need to overcome together. There is something weighing the two of you down: it could be a slump in your career or a financial hiccup at a time of need.

The snowy background also indicates that the challenge comes one at a time, but it is undercut by the reassuring image of a church window and two people marching together. You two are beaten but most definitely not broken.

By working together and keeping your heads held high, you will conquer this pivotal point in your relationship. You and your significant other should remind yourselves of the commitment you have made with each other and your promises to get through everything, no matter what it takes.

Use them as a daily reminder that although times are hard, for as long as you have one another, you have hopes for your future. If you are single and your prospects of being together with your love interest are looking dim, don’t give up hope! It may just be a slight setback in your mission to have a love life, but you will find your source of inspiration soon if you keep going.

Be strong. This time is only happening as a test of your strength and willingness to push forward regardless of your current state of being.

If you could get through this, then the rewards that your mind and heart will be getting are worth more than the trouble.

We are looking at dark days ahead for you and your business with the Five of Pentacles in the upright position. Much like the snow in the card, your endurance and will to earn money no matter the odds will be stretched to its absolute limit until life deems it necessary to finally set you free.

However, in this scenario, you’re not going to stand alone. You have friends and colleagues who are most likely willing to go through the same burden as you with painstaking devotion.

This makes this outcome lucky because your allies are unquestioningly loyal. No matter how challenging the project or venture your workplace will be veering towards, you and your colleagues retain your faith in one another.

You believe in each others’ capabilities and that with a little bit more push, you will be able to get through this.  If you are a business owner, this can mean that your investors and co-owners would not give up on your shared venture.

Instead, you will be helping one another get through this hurdle because you believe that your business is worth saving and that the potential to make it big is worth every effort. While times are indeed complicated, you will be able to get through it all with the unshakeable support of your colleagues.

You may get disheartened by the things going on in your career, but they are not enough reason for you to give up on your dreams. Don’t lose hope!

The reverse position of this card indicates dread and defeat. Perhaps by a cruel stroke of fate, you poured all your resources onto something and it still didn’t work, leaving you with nothing but a battered shell of your former self.

Things can be very discouraging for you right now and you may even feel like working for anything just can’t help you out. But the thing is, sometimes the best solution is to find emotional shelter and release.

If you’re hiding something right now, let it all out and have a talk with your friends, who might also be going through the same thing. With the two of you together and enough faith in yourself, you can certainly perk back up again.

With the reversal of this card comes the realization that you two have gotten very tired of each other and your relationship’s structural integrity has been stretched to its absolute limit. This is outlined by the church window: by being reversed, it means that the only thing which can save your dying relationship is nothing short of a miracle.

However, it doesn’t have to come externally like a friend or a family member, but something as simple as a picture of your earliest days together to remind you of what made your relationship lasts this long. If you still want to push with your relationship, you must do your best to prove to your partner that your partnership is still worth it.

To do this, you will have to make up for your shortcomings and make good on the promises you have made early on in your relationship. It also pays to go back to the things you and your partner used to enjoy when your relationship was starting.

Through this, both of you will be reminded of the reason why you started dating one another and your commitment to one another. Make sure, though, that your partner is as committed as you are in saving your relationship.

There is no point in trying to save something if the person you are supposed to be working with is no longer interested in making things work they are supposed to. Should this happen, then it's time for you to leave and move on.

In the reversed position, the Five of Pentacles’ suffering is unfortunately multiplied. Not only do you not have a greater challenge ahead of you, but it would also seem that your team will be a challenge you’ll have to confront sooner or later.

This is because of everything you’ve been through. You may know each other well, and while that is good, it also means they probably are hiding a lot of anger.

Talk it over with your colleagues. Ask them before starting tasks if they have misgivings against each other and then try to resolve it.

While it is still early, you have to address the problems and concerns that your colleagues have about your leadership and that of the company.  Talk things over, no matter if it's something as big as their concern for the project's viability or them thinking of their coworker as annoying.

You can use their feedback to formulate viable plans to mitigate further complications and patch things up with them. As for yourself, you have to adjust to the concerns that were presented to you and do something about them.

You cannot solve this problem if you do not resolve other people's issues from your performance. Thus, it would help if you also lower your pride in the process.

When the challenge mentioned above comes, you and your team will be ready to face it head-on. With your strengthened bond as a team, anything is possible for all of you to overcome, no matter how stressful or tiring it can get.