Discover what five of swords tarot card symbolizes based on its upright and reversed positions.

The appearance of the Five of Swords refers to conflict, arguments and disputes. It is also linked to the defeat, downfall and misery that comes after engaging into a battle or fight of some sort.

The feeling of losing in the said encounter will be grave and hurtful but one must not be pessimistic and cynical about it. Every person must handle loss and defeat with hope and positivity and must exert great effort in moving forward from the pain of failing.

In this card, a man can be observed looking at his opponents with grace and contentment. He seemed to be pleased and gratified with the way he defeated his enemies as he gazed steadily on them from afar.

There are five long swords that can be found within his immediate presence and these were believed to be snatched from his adversaries who walked away in grief and sorrow. The sky that can be found above them looks gloomy and cloudy as the sadness brought by the confrontation still does not cease to exist. 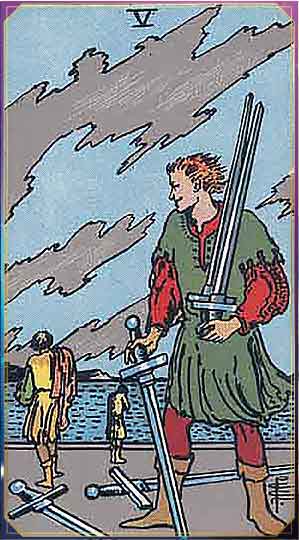 The presence of this Card in Upright indicates that you are engaged in a conflict or fight of some sort. There is a tendency for you to be involved in disputes and disagreements and this could verily lead to aggression and hostility.

Other than that, it may also mean that you desire to attain a lofty and risky ambition. You may be too engrossed in reaching the said dream and this could yield negative effects on you.

Thus, it would be better if you would stay realistic and practical with your visions and plans in life.

This indicates the possibility of a huge impending loss, which you’ll inevitably have to cope with. In a relationship, this can mean that an event can cause it to either buckle or break, or that one of you may lose something extremely important, requiring the other to be the emotional pillar that they’ll soon need.

There is a huge possibility that the challenge you will soon face as a result of external factors. Regardless of the source, it will be a tiring experience and would undoubtedly cause either of you to experience losses and heartaches that you’ve never experienced before.

Sadly, losses in relationships can be extremely taxing. As such, you need to trust each other, because at a time of great defeat, the world may not bat an eye, but an earnest lover will always stay by your side.

Be your partner’s source of strength during this period. They would need your constant presence, guidance, and encouragement as they try to weather through this occurrence with you.

Similarly, they will be the shoulder that you can cry on when things start to go badly for either the two of you. It would be best if you will not add to each others’ stress.

Rather than aggravate things, your relationship would benefit more if you stand together in solidarity and resilience as life throws whatever it can at you and your significant other. This way, you can prove your love for one another in a more profound and meaningful way despite everything.

This is a card of surrender and defeat and likewise bodes poorly for anyone unfortunate enough to see it upright. The basic idea behind this is simple: as you can see in the imagery, men are walking away defeated, but one of them maintains a smirk; this is the smirk of a traitor within your midst, who could be mismanaging your company’s funds or sowing confusion within the team by opening up points of conflict.

Be wary of the people who act like they have the best interests of your workplace in mind. These are usually those who have a vendetta against their teammates or bosses and would do everything they can to take down the reputation and careers of those they hate.

It is best if you address this problem as early as possible. These negativity-bringing people would watch out during crucial times, such as when a major project is coming up.

They would act either independently or under the outside influence and sabotage everything you and your team worked hard for. Avoiding this outcome will require you to be draconian by weeding out the worst elements of your team or your own worst tendencies.

Such an act might shock many of your colleagues, but this is a necessary thing to do so that you can prevent even more unpleasant outcomes. Once everything has died down, only then will they understand the importance of what you have done to protect them and the integrity of your company.

You have come to realize that the tension brought by the conflict has become too overwhelming. Therefore, you have decided to move on from it and just forget about the despair that it gives.

You are now ready to forgive yourself and put the sadness and pain into oblivion. You are now determined to devote all of your time and energy into productive and valuable things.

The Five of Swords’ reversal indicates the necessity of a resolution. Just as all battles draw to a close, so too should any emotional conflicts you may have with your partner.

Sure, your experience was not pleasant, and some parts of the entire shebang can’t be easily forgiven as of yet. But it is through the issuance of a sincere apology and a gracious countenance that you and your significant other can move forward from this otherwise painful learning experience.

The thing to note with this outcome is that it’s usually a positive thing, so this means it most likely won’t result in a breakup. All that you need to remember is that however big the conflict is, an amicable and fair resolution will almost always be reached if the two of you have a strong bond of which you can both remind yourselves.

Be prepared to create a compromise that would satisfy both of your needs. After all, the two of you still have to ensure that your relationship would still be beneficial to the two of you, especially in the emotional and mental sense of the word.

This way, your needs and concerns that have been the cause of the entire debacle would have their resolutions. There is no guarantee that you will not go through this harrowing experience ever again.

Regardless, what you have learned during this period would prove handy the next time around. More importantly, it will help your bond become more robust than ever.

Amazingly enough, the inverted Five of Swords represents victory as a result of cohesive teamwork. In particular, this outcome alludes to overcoming the most difficult financial hurdles one faces as a result of a unified team spirit.

Creating project after project can undoubtedly cause financial constraints in your company. However, the quality of work that you and your team will produce excellent results through close ties and professionalism unlike any other.

This will then help address the financial challenge that you are facing right now. The key to properly embrace this card’s blessing is for you to handsomely reward and thank your team.

Don’t let your bond fizzle away once you’re done working together on a task; maintain connections with them and genuinely try to be there for them, as it means more people will lend you a hand in the future. Ensuring good linkages will be your key to ensuring further success.

No man (or company) will ever be able to reach victory without a bit of help here and there, and so, recognizing the value of the groups and individuals who extended their hand to you makes for a good business habit. As you expand your company’s reach and your income increases more than you would have ever imagined, always look back with gratefulness to everything and everyone that got you to where you are right now.

Give back as much as you could; it is with humility that everything would turn out wonderfully.