Discover what five of wands tarot card symbolizes based on its upright and reversed positions.

If you ever get the Five of Wands, there’s a great sense of confusion here. This is apt, considering that the card itself makes this point by not having any sense behind its imagery.

This suggests both a sense of conflict and apathy, which is further magnified when you look at the differences behind their clothes and expressions. Some are holding their wands joyfully, one of them seems to labor with both hands, while another seems absent-minded.

Looking also at the wands themselves, you’ll see that they in fact overlap, which indicates chaos and the multiplicity of perspectives. Because of this, you’ll need to be very careful.

Disunity, disorder and conflict are the main problems this card presents, and you’ll be able to counter these best by knowing exactly where your place is in social and team-based settings. 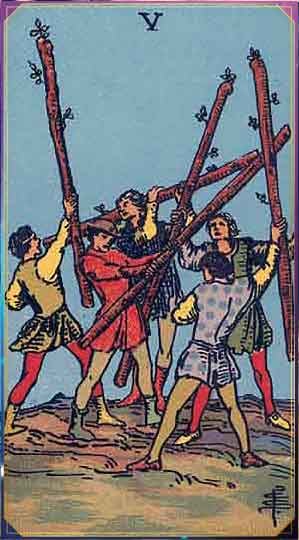 When you get the upright position, it means you’re probably doubting a lot of things or that you’re in an environment which makes teamwork difficult. Perhaps you’re doubting the honesty of the people around you or even the authenticity of your own motives, and this could be interfering with your ability to work with others, but you have to remember that distrust only breeds distrust.

. At this point, compromise and adaptation will be your two best friends.

Talk to others and make the first move. Who knows, you might have more in common with others than you think!

This is a time of disagreement between the two of you. While it isn’t so grave as to actually cause significant friction, the differences in perspective and a slight inability to meet in the middle can sometimes cause things to escalate unnecessarily.

Relationships are founded on acceptance and compromise. However, it is much easier said than done, especially if you know that your partner is unreasonable or that they refuse to acknowledge that they are chaotically destructive.

The same goes for you, especially on habits that seem to bring more harm than good. Asserting yourself can be a key to the trouble, along with the serious and no-holds-barred conversation.

You will also have to accept that occasional conflicts are normal. Thus, you need to keep communication lines open, along with the acceptance that you may sometimes have to concede to whatever your significant other wants.

The problem with this setup is that while it indicates a healthy relationship, it is also a defect that leads to more serious, destructive moments. Likewise, if you’re single, you may be too ambitious or argumentative for your potential partner.

Hence, it is important to set guidelines on how to end complicated debates amicably. While you are still in the “getting to know you” stage, the two of you must be honest and open so that you will be able to gauge each others’ personalities and attitudes.

This way, when you and your partner-to-be start to engage in a more serious relationship, you can quickly synergize and adjust to each other.

This card suggests the existence of a conflict in the workplace-- and that you might soon be playing a big part in it. This is likely because you’ve had fights before, and now that you’ve another undertaking that needs completion, you’re going to be working with the same people, with different ideas and temperaments.

In an image that shows five people fighting, what will you do? Will you eagerly participate in the carnage, or will you step back and mediate the conflict, so you can all grow together as people? The choice is yours. While the water is still simmering, you might want to turn the stove off.

Reconcile with your workmates with whom you have had conflicts in the past and work out your differences. This may not guarantee that you will be able to avoid the potential chaos, but at the very least, you did your best to extend an olive branch to them and patch things up.

Likewise, be more forgiving towards those who will come forward to apologize to you. Consider your peace, as well as theirs.

You need not forget what your offenders did but rather free yourself from the grudges you hold towards them. This will help you prevent causing chaos once the time comes.

This is a time for you to mature not just as a worker, but more importantly, as a person. Choose the high road and set an example.

It isn’t an easy path, but you can achieve inner peace and career success through this.

If the upright position indicates doubt, the reverse indicates the reality of those doubts. What were once simmering conflicts could now be actual infighting between you and your team as skillsets and perspectives clash almost daily.

With no one stepping up, there is no way to resolve the anarchy that has since taken over. At this point, you are presented with a trilemma: either you assume a diplomatic or dictatorial role to help keep your team together, make drastic reforms in the team dynamic or leave and start over.

The key point to remember here is that with confusion comes choices, and that whatever choice you make could change your future with others.

By contrast, the reversed position indicates that your relationship has reached a fever pitch of constant yelling and abuse. In fact, it seems that things won’t be getting better anytime soon.

This is the time when you must reevaluate yourself, your partner, and your relationship. Ask yourself: why are you doing this? What is the root cause of it all? Why do you allow yourself to be chained by past grudges? And most importantly, why are you still in the relationship? Do you still see some redemption for it, or are you just staying for the sake of commitment? There’s a reason for you to hope if either of you is capable of swallowing their pride for the sake of the relationship, but if you’ve become too drained to attempt reconciliation, the best thing to do would be to think about finally cutting the rope, because unfortunately, the only way out in some cases is to really let go of things altogether.

Breakups hurt. No matter how much pain your significant other had caused you, it would be difficult for all parties to part ways if your relationship was founded on love.

But sometimes, it can be the only way for you and them to grow and be free of the burdens you imposed on one another. The end of one relationship does not mean the end of the world.

There’s still so much to look forward to, but remember to take care of yourself first before proceeding with another chapter in your life.

In the reverse, this card shows that you are about to have a resolution to your interpersonal conflicts, which is great if you’re looking to explore new avenues in your career. For example, an old business partner you may have had quarrels with in the past seems to finally want to reach out to you and resolve past differences, and any coworkers you’ve had difficulties with may finally stand down.

This is a time of relative peace to both your career and personal life. As everything starts to settle down, you will find yourself able to focus more on your work and establish good relationships with the people you are with almost every day.

This bodes particularly well because, in the battles ahead, you will need people who can offer help and provide necessary assistance for boosting your bank account. However, aside from the financial assistance that other people can potentially give you, remember to be genuine in accepting and giving apologies to the people with whom you’ve had conflicts before.

No amount of money can ever replace the value of human connection, and thus you must remain civil and open-handed during these kinds of situations. Be kind to others, and they will be kind to you.

Always see to it that you do not offend someone to the point that you will jeopardize your relationship with them. You’ll never know how important someone is in your life (either as a coworker or personal friend) until it’s already too late.