Discover what knight of swords tarot card symbolizes based on its upright and reversed positions.

The Knight of Swords is an image of conflict, loss and intellectual control. It exemplifies a dynamic and aggressive personality who is determined and motivated to attain success in his endeavors.

It also connotes dark and struggling times and the need to overcome all of it through grit and critical thinking. This card is illustrated through a figure of a glorious and valiant knight riding hastily on a white horse.

He seems to be hurriedly trudging towards a big battle, enamored and fully-equipped to bring down the challenges and obstacles of life. The white horse secured in a harness symbolizes the purity and mental force that this individual possesses in conquering the tough enemies that he may encounter.

Stormy clouds can be seen lurking on the sky as he continues to journey towards the fullness of this fight. 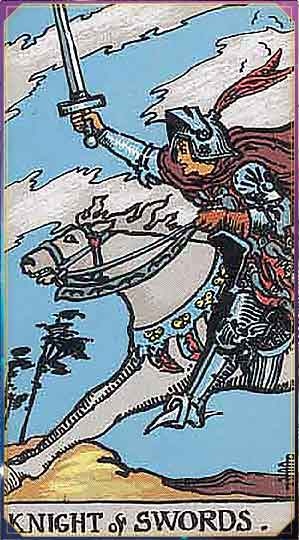 The Knight of Swords is an epitome of a person chasing colossal aspirations and towering ambitions. He is an individual who is very determined to achieve his goals and to transform his dreams into reality.

He focuses too much on attaining success that he tends to disregard the possible effects of his actions. It gives a reminder that when there is inability to prepare and foresee the consequences of his decisions, it could lead to his failure or downfall.

Furthermore, the presence of the Knight of Swords Card in Upright suggests an open and welcoming attitude towards incompatible ideas and conflicting thoughts. It will be more exciting and fulfilling if you make space for people who possess contradictory beliefs and principles rather than constantly being with those who always agree with you.

In any relationship, change is inevitable and even necessary. The world never stays still for the two of you, and so you must be ready to adapt and meet the challenges ahead, which tend to get bigger and bigger as your relationship ages.

This is the world telling you and your partner to grow up while also ensuring that your relationship will also mature as you go. No one stays young forever, and if you want to make your partnership last a lifetime, the two of you have to step up and become the adults you are now being called to be.

To facilitate this, you need to have an open mind and constantly have a positive disposition, especially since not all the changes are going to be negative and hard to deal with. You might even start some yourself by setting up your own home and finally living together.

Adjustments are necessary as part of maintaining a healthy and robust relationship. Sooner or later, you will find this whole experience as enlightening as it will reveal to the two of you sides of each other that you haven’t seen before.

As your relationship progresses, you will soon be able to learn more things about each other which will help the two of you gauge whether your relationship is still worth proceeding with or not. Whatever it is, make sure that your decisions are soundly made and keep in mind the long-term implications of everything.

Now is the right time for making things happen!

The swooping Knight of Swords in the upright position is exactly what you think it means in terms of financial growth: being bold and taking charge. When making new companies, the best CEOs understand that they are throwing thousands into the free market.

The key is to learn how to isolate and mitigate the negative factors. Similarly, you’ll need to do the same thing no matter how small the venture.

Despite the looming uncertainty, you should take this chance to improve your business venture. Chances are this is the opportunity you’ve been looking for to make it big and finally make the market breakthrough that you’ve been dreaming of! Conversely, if things don’t turn out the way you wanted them to be, then take everything that has happened as a learning experience.

The losses you will suffer won’t hurt as much anyway and would still make you feel like the risk was still worth it, as it will lead you to more viable options. If you’re an employee, consider approaching your employer for harder tasks.

It might increase your responsibility, but it will also give you a lot of money. Additionally, if you’ve served for so long, take this chance to ask for a promotion.

The whole experience can be stressful, sure, but you never know if you won’t try (and maybe your higher-ups were waiting for you to voice out your want to get ranked because they are unsure if you want it in the first place.).

As a Knight of Swords, you may be overflowing with zeal and energy to accomplish your goals and plans. But when this card is placed Card in Reverse, it may indicate that you are diverting such energy into thoughtlessness and intolerance.

Because of your impatience and recklessness to attain success, you have the tendency to make judgments and decisions that are not carefully thought of. This may result to a disorganized and inefficient output.

Raw aggression is the worst possible meaning of this card’s reverse position. This means that either you’re too aggressively trying to set bridges with the person you love that it may be overwhelming them, or that you’re pushing your decisions way too hard to make the power dynamics between the both of you work properly.

Though being assertive in your relationship has its merits, overdoing it will cause more harm than good to you and your significant other. Insisting on the things that you perceive to be better without even consulting your partner is not only annoying but downright selfish.

This opens up the possibility for an abusive relationship from which a way out could be very difficult to find. To counteract this, you need to be more methodical, slow down and compromise to ensure everything stays in order.

Remember that you and your partner are supposed to be equals and that no one is subservient to the other. Decisions must be made in a way that considers the well-being of all parties and respects boundaries.

Be more accomodating of their needs and not act high and mighty if their opinions don’t work out the way they’re supposed to. If you cannot do this, then perhaps it is time to cool off the relationship.

You need to work on your personal issues rather than end up victimizing someone else. Learn to become a good listener first before engaging with someone in a romantic manner.

By contrast, the reversed Knight of Swords tells you to slow down and pace yourself before abruptly charging in. While financial growth often involves taking gambles, relying purely on luck also gets you nowhere, and it even amplifies negative outcomes because you’re not controlling the amount you’re spending when making the gamble.

Sure, fortunes rise and fall, but you are talking not only of your future but that of the people who work for or with you. The risks that you are taking do not translate to your life alone but theirs as well.

You might not mind the loss of some of your income, but it might spell life or death for them. Hence, don’t go rushing in begging people for more pay.

Controlling your pace is definitely difficult since it is tempting to make more gambles once you’re in deep, but pacing yourself will allow you to pick more battles and win. Be prudent in choosing where you want to invest your money.

Not all opportunities produce the same results, so you need to decide which one is worth the time and effort venturing to.  Your financial status won’t be close to bankruptcy, but it won’t be looking up, either.

The decisions you will be then taking from here on will dictate what happens next to your monetary gains. Make sure, though, that you are choosing what maximizes benefit and not because something sounds so too good to pass up.