Discover what the emperor tarot card symbolizes based on its upright and reversed positions.

The emperor makes a great emphasis on the prestige of leadership and control. His figure represents a stern and formidable ruler who thirst for influence, power and stability.

It symbolizes masculinity, authority and direction and gives an importance on achieving positive action by instilling the virtues of discipline and fortitude in one’s mindset. The rams surrounding his throne denote Aries as his zodiac sign while the scepter and the orb signify his authority to rule.

The long beard that can be found on his face embodies his extensive experience in leading his pack and the empty mountains found at his back depict his drive and determination to attain excellence and superiority in his actions. 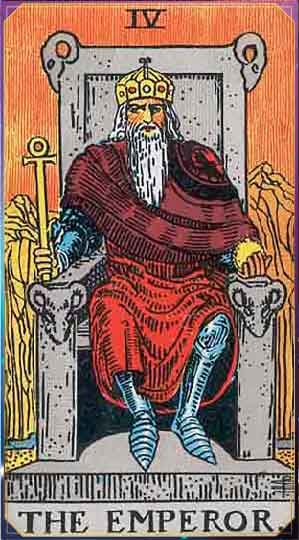 The paternal figure of the emperor gives life to authority, control and influence. When the card is turned upright, there is an opportunity to succeed when your actions are coupled with the right set of strategy and tactics.

Your job or position may entail taking care of something important and there will be a need to weigh and consider the options well. Just like the emperor, victory will surely be within your grasp if there is a proper application of wisdom and power.

In romantic contexts, the symbol of power, authority and order necessarily translates to an orderly state of affairs. This means your specific relationship is founded on something sturdy such as true mutual love, an emphasis on making each other happy and being strong emotional pillars for one another.

No matter the obstacles life may throw at you or your partner, you’re guaranteed the security of each other’s company, as well as all the guarantee that your collective labor will lead to a strong family unit. Your relationship is the envy of many-- robust, firm and united.

The most imperious card of all the Major Arcana represents a powerful combination of innovation and focus. In terms of career and wealth, this means that you’re not only a productive worker charismatic enough to assemble an entire team of equally competent people, you have a rare sense of focus that allows you focus on objectives without making substantial deviations, making you a perfect fit for managerial, high-stakes roles.

If you are looking for a sign to get yourself promoted, then now might be the right time to do so, as it also means expanding your income greatly.

When the card is reversed, the presence of the emperor may mean abuse of discretion or power. It portrays a man who is overly obsessed in controlling the lives or action of others, be it in work, personal life or love life.

It could be in the form of an abusive superior, a demanding father figure or a tightfisted partner.

If all relationship requires power and power has the tendency to corrupt, then this card is one which you should really watch out for: it means that your relationship dynamic is built upon opposing values which naturally contradict each other. In fact, you might already be feeling a little bit of this yourself right now-- perhaps you or your partner are calling the shots way too often, or that you argue on a daily basis.

Truly, it is hard to overcome the impulses of power, but it may be the only solution for a relationship that could eventually fall apart.

In the reverse position, the Emperor suggests that your career may be in shambles at the moment. You’re not out of the fight yet, and there’s always a chance to recover, but unfortunately, the situation is starting to have its effect on your sense of confidence, almost to the point where you can no longer delegate or lead effectively.

In such cases, cling to hope and find the sovereign Emperor within you. Your wealth will improve and your career will certainly get better, but you need to stand firm and take the lead before anything else.