Discover what the hermit tarot card symbolizes based on its upright and reversed positions.

The presence of the hermit card signifies the importance of contemplation, soul-searching and reflection. It gives you a great time to examine your inner self and reflect on the things that you have done on your life and how it affected others.

It encourages retreat and introspection on the many decisions and choices you have made in order to assess if it made you better or worse. The hermit is portrayed as an old man dressed in a long robe carrying a lantern on one hand and staff on the other.

This symbolizes the gift of wisdom, power and authority he possesses. The mountain where he walked represents success and development in important aspects of life. 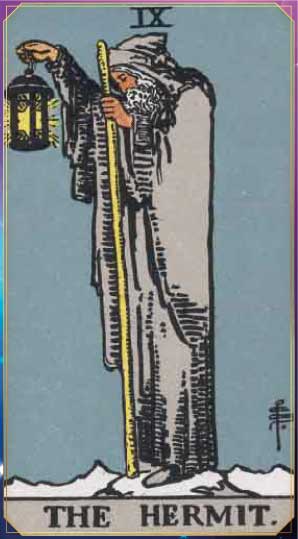 It means that you yearn to be alone and to use some quality time for a positive reflection and retreat. You want to momentarily live in solitude in order to be away from the hustles and bustles of life.

You believed that the answers to your questions can be found by searching it in your inner self. This will help you clear your mind and refresh yourself of the things and goals that need to be prioritized in the present time.

Acquiring the Hermit signifies a time of self-evaluation, introspection, and honest reflection. Love here is no different: with the amount of preparation it requires and the emotional toll it can take on people who aren’t ready, now is a good time for you to relax, meditate and imagine what the best arrangement will be for the near future.

But don’t mistake this card to mean negatively. After all the upright position indicates positive things, so by reflecting on yourself, you’re really just preparing for the person you’re about to meet very soon!.

In all likelihood, you drawing the Hermit in its upright position means you’ve become enlightened in the realm of finance. You’ve probably devoured plenty of books on economics and financial management in your life, gaining valuable insight as to how the free market has moved throughout history as well as being able to predict when exactly to make investments.

With your vast arsenal of knowledge, you can very easily turn unsolvable crises into genuine opportunities. Your financial mind is the envy of all who tread this earth, and you should probably share your knowledge with others!.

Although contemplation and soul searching are considered as healthy habits, too much of it may be detrimental to yourself and others. It may consume and devour you, bringing you into the realm of angst, madness and depression.

There is a big possibility that you will be trapped on your own world, making it very difficult to escape from its tormenting influence. Thus, do not allow yourself to be drowned by it.

In any relationship, it is completely possible for you to be in a committed romance with someone and still feel utterly alone. The reversal of the Hermit card indicates this much, and this could mean many things in a practical way: it could be that you’ve fallen out of love and feel trapped because you can’t admit it to yourself, or that there’s an insecurity within that your relationship is somehow making worse.

If you’re having any of these problems, being honest might be the first step towards healing your personal void.

Rather than enlightenment, you may well be at your most confused state yet financially. You’re not necessarily spending too much, but you can’t seem to find a way to distribute expenses properly, so all the money that you have is currently just sitting there waiting to be used or even worse, devalued much later with potential pitfalls in the economy.

To get out of your conundrum, don’t hesitate to read up on how to manage expenses, as the wisdom you end up gaining in the process could significantly help you much later in life.