Discover what the tower tarot card symbolizes based on its upright and reversed positions.

The tower card establishes the fact that nothing is constant except change. It signifies the relinquishment of old habits and the establishment of new ways.

As seen in the figure, the card portrays a lofty tower resting on the top of the mountain. With a lightning bolt striking at its pinnacle, the edifice turned into flames and was subsequently destroyed.

This represents change and the abandonment of long-standing beliefs. The people found inside it came dashing and hurdling out of the windows because of the fire it brought.

They want to free themselves from the chaos and disorder caused by the said tragic event. This symbolizes the desire of the people to initiate change and to escape from their past and unhealthy traits. 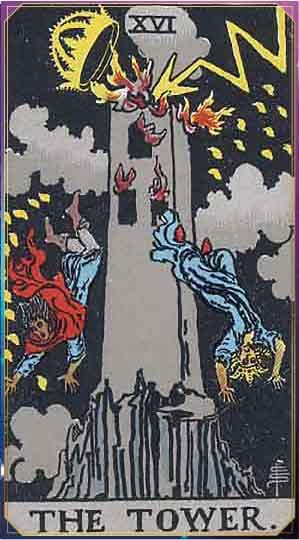 Change is seen in a positive perspective. Although the card visually depicts a catastrophic and disastrous event, the card cannot be viewed negatively at all times.

It implies that change is inevitable and there is no better way to deal with it than to accept it. It is a normal aspect of life that aims to get rid of some bad and wicked traits.

It may be daunting and intimidating to go through but these changes will surely be for your own good and benefit.

The upright version of the Tower is an ill omen indeed. With the tower being struck down, it serves as a metaphor for how your own relationship could likewise crumble.

The card is warning you that you and your partner are about to descend into a more chaotic period in your relationship. Without any warning, the very foundations where your partnership was founded will disintegrate very soon.

Keep your eyes peeled for any signs of this happening. You can also expect this to happen even when your relationship looks stable.

If you’re single, this card serves as a cautionary tale. It is not a good time for you to enter a relationship, as it would be doomed sooner than you expected.

Instead, take this time to look through the people you are interested in and try to know them better. This way, you can avoid disaster once it’s time to engage in love.

Relationships crumble when both partners become too confident in their own happiness that they don’t check for potential points of friction. To make sure this doesn’t happen, couples need to work through personal issues and always check up on each other.

Be on your guard during this time. You will never know what the world has in mind for you and your significant other.

While it is still early, check on your weak points and see what you can do to mend them. With this, you can weather through the incoming storm and emerge with your relationship still intact.

The Tower represents the destruction of order: systems, buildings, personalities, anything that alludes to the idea of a structured life. Needless to say, this makes it a bad card for people looking to expand their wealth or business.

More precisely, it is a warning about management. Unforeseen problems such as recessions or attrition could destroy your business’ prospects, which will inevitably seep into your personal bottom line.

This doesn’t mean it’s not preventable, but you will need to look for weak points in your current methods or ways of thinking to stop the looming catastrophe. You should stay put during this time.

While making a few plans here and there certainly won’t hurt, it is not the period when you should be acting on them. Instead, focus on your current business and try to resolve its potential weaknesses.

Another recommended course of action is to set aside more emergency funds for yourself. The incoming chaos would certainly hit everyone and not just business people.

It is better if you already stock up on the essentials, especially those that can be relatively pricey, while it is still early so that when the disaster strikes, you don’t have to worry too much. As for opportunities, they would be relatively scarce during this period.

You don’t have to worry, though. Although the disaster will happen soon, and its effects would affect everyone for a long time after that, you will be given ample time to recover and get back to your feet.

Since the tower is constructed on corrupt desires, it will not prosper into something great. The downfall of this structure will cause you hardships and crisis.

But do not let this turmoil affect your progress. Regain your strength and be energized with the fact that this obstacle will soon pass if you would just believe.

Soon, this change will manifest into a beautiful work of art – a new and better version of yourself.

When a great disaster looms, sometimes the only real thing one can do is to mitigate the damage. This is the lesson the Tower Card in Reverse imparts on romantic couples.

When a relationship is so disturbed to the point of breaking and there’s no room for repair, you may have to accept the reality that all good things must come to an end. It’s okay to cry, to feel sad, to be nervous at a time like this.

You will be in denial at first. You may even try to grasp on straws as you find possible loopholes that will get you out of the chaos that is your relationship.

However, the longer you try to turn a blind eye to things, the more will help the universe shove into your face that you should stop trying and graciously accept things. The best thing that you can do is to end things amicably with your partner.

There is no guarantee that you won't be hurting for a long time after your breakup. But, at the very least, you will have the closure you need so that you can move on much faster.

Let it all out, then try to think of what you can do. Start by working on yourself.

Focus on self-love and let yourself recover. Don't wallow too much in what has already ended.

Try to look forward in anticipation of who might be the person who will enter your life next. Love will always be present; you only need to be patient.

As with the Devil, this is one of the few cards in the Major Arcana whose reversal is an expression of a positive rather than a negative. In this case, it literally means that you’ll narrowly avoid total financial disaster, either because you’ve sufficiently prepared enough resources to withstand worst-case scenarios, or that your business model is robust enough to outlast any challenge in the free market.

This also says a lot about your style of leadership: you are beloved for your wise choices, and the state of your business and finances shows it fully. This is not the time to celebrate, however.

Use this opportunity to work on the things that still need improvement in your business. See what else needed work on to sustain the momentum that you already have to keep yourself afloat.

Be considerate of your employees, especially those who could not fend off a few hits here and there because of the economic crisis. As much as possible, give them some form of assistance to help them get back on their feet and recover much faster.

If you are an employee and still reeling from the chaos that your workplace just endured, give yourself a breather. You managed to withstand a storm, and now it is time for you to provide yourself with much-needed rest.

You don't need to spend on things to enjoy and relax fully after the onslaught of a storm. Simply take deep breaths and count your blessings- the battle isn't over yet!