Discover what two of wands tarot card symbolizes based on its upright and reversed positions.

The Two of Wands is a fascinating card, even among all the Minor Arcanas, for representing growth, expansion, power and doubt altogether. For one, notice that the man seems to represent a dividing line between the forest and mountains to the right and the sea and open field to the left.

Between these two areas, he looks to his left, suggesting not only a longing of the open, but a desire to extend one’s reach. You’ll also notice that the right wand seems to be fastened onto part of the wall by a metal holder at the bottom, representing a strong desire for stability, while the man holds the left wand, elevated by what seems to be a platform.

The platform itself has a flower motif, blossoming both upward and downward. This represents the need to grow in every direction, but what really seals the deal is the orb he himself is holding.

Even in antiquity, there was a belief that the “world” as we knew it was circular. The Romans, for example, called the world “orbis,” which is a relative of the word “urbis--” urban, suggesting the need for growth.

Lastly, the man’s face seems to be largely absent from view, casting much doubt as to what would otherwise be a sublime image of power. As such, this card is both a tale of limitless growth and the doubt that comes with trying to grasp the infinite. 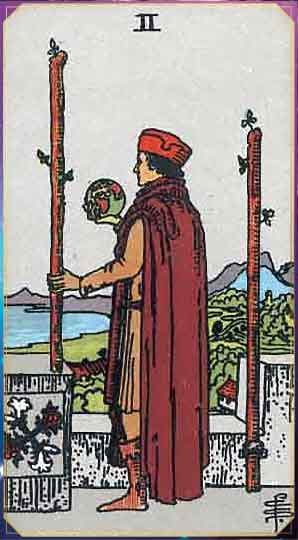 An upright look of the two of wands suggests confidence and a passion for endless growth. You are a confident strategist and conqueror, eagerly thinking of how to further expand your personal empire.

You want to see your career grow, learn new things, go for areas where most people would not, but you’ve not quite yet implemented them into action. Whatever it is that’s stopping you at this point should be something worth pondering, as it can mean the difference between implementing your plans and forever living in an imaginary world of conquest.

Plan hard and ponder deeply before making any moves, and once you’re confident enough, raise your wand and strike.

One of the most consistent cards of the Suit of Wands, Two represents the completeness and majesty of life’s possibilities. You now have a unique, birds-eye view of your current relationship, able to judge for yourself which direction you want to take it, and actually seeing your deepest desires realized before your very eyes.

Evaluate what you are seeing and ask yourself: is this what you truly want? Do you think your current situation will benefit you and your partner, or would it be detrimental instead? What are the things that you can do to help strengthen your relationship with them? As you go through all the possibilities, try to seek solutions that would guarantee you and your significant other’s happiness. Bear in mind that it isn’t just like deciding what to wear and eat; you are taking charge of your relationship to guarantee its longevity.

However, this doesn’t mean you can just unilaterally impose choices without your partner’s consent, either. All this card tells you is that they’re more likely to agree with anything you want to do to help fortify your relationship.

If you are single, this is a sign that you should listen more to your intuition. Should you get some bad vibes from a person you are interested in, it is best to drop them altogether.

However, if you are getting a consistently good feeling from them, then feel free to proceed with whatever you are planning involving them.

A man holding a globe while looking at a horizon has always symbolized the potentiality for conquest and gain. The whole world is opening itself to you, full and brimming with countless ways for you to improve your standard of living.

This is now your chance to take on the goals you have set for yourself. So many avenues would open their paths, prompting you to make difficult decisions.

After all, the offers you will be getting are so tempting, with each one more lucrative than the last. Your options are likewise limitless: you can open up a new restaurant, bar, even a BPO if you’re feeling up to it.

This also carries a great deal of personal responsibility, for while you have plenty of things to choose from, the wrong choice could leave you worse off financially. Consider your current situation and try to foresee the possible consequences of each possibility that is being offered to you.

The factors that you will weigh in can range from your connections to financial security. This gamble that you will be taking has high risks, so choose responsibly! At the same time, all the uncertainties will have benefits for you, one way or another.

Many will focus more on the monetary benefits. Some will give you valuable connections which you can use later.

Still, others will guarantee skills improvement. Whatever it is that you decide on will significantly affect you for the long term.

Keep this in mind as you decide.

Reversing the two of wands signifies a failure to move on from past glories and a personal angst. All of us have accomplished something great in the past, some of us still think fondly of them today, but you might still be trying to consciously replicate the feeling of the old days.

It’s a natural feeling to have, but it can be detrimental in the long run, since it makes it difficult for you to see new opportunities. For you to be able to move forward, you need to get out of the past.

It’s easier said than done, but confiding with friends and reflecting upon it deeply might just help you out.

The relationship you have right now is largely unstable because of poor management. The both of you are locked inside your own heads, unable to see the world before you and what you two can do together if you would just leave your personal shells.

Constant conflicts and mistrust further fueled the uncertainty that you have in your relationship. As time progresses, so does the level of anxiety you have about whether you are genuinely in love with you or simply using you for their benefit.

Whatever good effects the Two of Wands may have is effectively buried by the anxiety represented in the reverse position, and you will need to take significant steps to make sure this is overcome. Discuss your current circumstances with one another and seek advice from dear friends, and you will find both comfort and answers.

In short, good communication is the key that will ensure that your relationship will remain intact. If you refuse to talk to one another or even flat out deny that there is something wrong, this problem will persist, leading to even more undesirable consequences.

Single people may also be undergoing some form of emotional torment. This may result from insecurities eating you up from the inside, preventing you from acting on your feelings for someone.

To remedy this, you have to talk to someone who knows you well. Let out what you feel, and it will make things a bit more bearable than they are right now.

Give yourself some self-love first!

If the upright position represents the infinite set of options that you have, the reverse position of this card shows the fear of choosing anything. In all likelihood, you were probably not scared of making choices yourself, but because something set a precedent before all of this, you are worried about failing again.

The overthinking that you are doing is precisely what prevents you from acting on the things that should’ve been resolved from some time ago. But being overly logical and dependent on the mind without input from the heart takes out the thrill and humanity behind your choices.

Reason dictates that you are, to some degree, correct: the possibility of failure will always exist, no matter when you make the choice. But if you do nothing, you also gain nothing.

If you choose to let go of your fears, then a world of possibilities await you. Financial expansion, wealth creation, even opportunity openings are just around the corner.

All you need to do is trust in yourself that no matter where you land on, you will make the most out of it and succeed. However, if you stay put, nothing will ever change.

You will live the life you always had. If you are content with such a set up, then by all means, live with it.

But remember that regrets come in late, and sooner and later you can only be disappointed for your refusal to say yes to the then-uncertain future. You will remain stagnant if you don’t act.

Take caution, but be courageous.