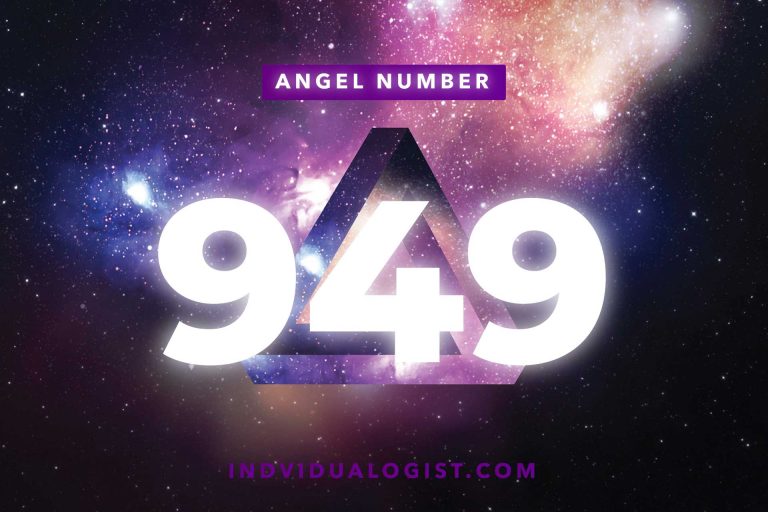 What is the spiritual meaning of angel number 949?

Angel number 949’s spiritual energy roots from the combination of angel numbers 9 and 4. Both powerful numbers on their own, they create an entirely unique meaning when they’re put together in an angel sequence.

And when a certain angel number repeats twice in the sacred sequence, its influence doubles as well. In this case, angel number 9’s spiritual energy creates more urgency for this specific angel number.

At its core, angel number 9 signifies lightwork, conclusions, and self-sacrifice. As the last in order among the single digits, it also signifies that some aspect of your life is about to end.

On the other hand, angel number 4 is a symbol of patience and trust. The guardian angels affirm all your potential, but you also have the spiritual responsibility to actualize this.

When you put them together, angel number 949 is a sign to trust the process.

When things start to turn around, allow life’s natural process to take place. This angel number is a message from up above to help you make sense of everything.

Receiving a divine message is a good sign in itself. Regardless of the message’s meaning, the fact that you’re receiving one means that the guardian angels are supportive of you.

They are witnesses to everything you go through in this lifetime. And just as how they’re here to celebrate your wins, they’re also here to be with you in times of need.

Through 949 angel number, the guardian angels are encouraging you to stop seeing yourself from a doubtful point of view. Instead, look into all your strengths, and you’ll realize that you can be so much greater than you are right now.

As a lightworker, you have a special touch on other people’s lives. Your innate altruism doesn’t allow you to continue living comfortably when you know that someone needs your help.

Now, here’s a warning: this is a double-edged sword.

There’s nothing wrong with helping other people, but it’s a different story when you’re burning yourself just to light other people’s candles. Seek to keep the balance at all times.

Angel number 949 is also a reminder from the guardian angels that you have so many gifts. Use them wisely, and more importantly, use them for good.

While angel numbers are mere messages from the divine beings, it’s humans’ nature to associate meaning to them.

First, number 9 has a mixed reputation across different cultures.

This is a lucky number for the Chinese because it has the same pronunciation as the Chinese word for “long-lasting.” Yet in Japan, this number sounds like the Japanese word for “suffering,” which is why a lot of people avoid it.

If number 9 has contradicting meanings, number 4 is viewed as an extremely unlucky number in China.

Simply put, number 4 in the Eastern culture’s counterpart for the West’s number 13.

Since it’s pronounced the same way as the Chinese word for “death,” a lot of Chinese people avoid this number at all costs.

In China, it’s common to skip the 4th floor and other levels with number 4. Plate numbers, as much as possible, don’t include this digit.

And when a person develops an irrational fear of this number, they’re diagnosed to be tetraphobic.

Even though the numbers comprising 949 angel numbers are mostly viewed as unlucky, the guardian angels remind you that you don’t have to be bound by all these beliefs.

Don’t let it get in the way of living your life.

It’s time to tread the path that you set for yourself, not handed down by society’s expectations.

What does angel number 949 represent?

Now, what does 949 angel number mean?

First, this special message is telling you to put serious thought into lightworking. There are many types of lightworkers, and despite all the possible resistance you put into this gift, you will continually feel like it’s calling you.

If you would like to make it into a career, the guardian angels are supportive of this. You’d excel in a place you’re passionate about, but again, be wary not to give everything away.

Always leave a piece of yourself for yourself.

Second, the guardian angels are telling you that if there’s an unhealthy, broken, or toxic aspect in your life, it’s about to end soon.

Despite all your attachment to it, learn to let go of what no longer works.

Make space for bigger things. It’s only in leaving the excess baggage behind that you can lighten the weight on your shoulders.

Third, angel number 949 is a message of patience. Not everything you ask for will fall into your lap in an instant.

Some things require hard work, and that’s what makes success so sweet.

Time is a friend, not a foe. There’s no use in going against it.

Instead, let it work its part in helping you out.

When it comes to matters of the heart, apply angel number 949’s meaning into your love life without hesitation.

If you’re single and open to finding love, don’t sit idly. Go out there and meet new people.

There are unconventional ways in meeting new people, like dating apps or online forums, so if the good old ways are failing you, why don’t you lean on technology for help?

You already have a way of talking to others. Your natural charm works its ways to ease conversations.

Love will come to you at the right time. There’s no need to rush.

Angel number 949 is telling you that even though you love each other, it’s normal for a relationship to hit a plateau.

Work on it together, as partners, until you find the spark to keep things going.

But if your relationship’s path is on maximum speed going downhill, the guardian angels are telling you that it’s time to step on the brakes.

Before things get messy and you unintentionally hurt each other, perhaps the best way to solve your conflict is to move on with your lives — separately.

Breakups may be painful, but sometimes, it’s the only thing you need to heal and become a better version of yourself.

Why do I keep seeing angel number 949?

Angel number 949 is a special message from the guardian angels that bear the advice you need in this specific moment.

If you keep seeing this sacred sequence, be it at work, home, or while doing errands, the guardian angels are trying to catch your attention.

This sign encourages you to live the best life according to your own rules and based on the timeline you set.

If you stumble along your path or hit a road bump, the guardian angels are here to help you out.

Close your eyes, open your mind and say a little prayer.

It will be their privilege to assist you in any way that they can.

Right now, the best thing you can do is to consciously get rid of the negatives that are affecting your life.

What are you gripping in your palm?

For starters, when are you going to forgive yourself for the things you’ve done in the past?

Rumination will eat all your progress, and looking back will only cause your neck to hurt.

Aside from being patient, angel number 949 is urging you to trust yourself more. Who you were yesterday is not an indicator of the person you’ll turn out to be in the future.

When the divine beings need to communicate with you, they send universal signs that can easily go unnoticed except by the person who’s intended to receive them.

Angel number 949 is a special message from the guardian angels that serve as a reminder of all the good things waiting in the future.

Out of all the signs and wonders, they specifically chose this message because they believe that it can help you with your current situation.

It’s common knowledge that its meaning deserves serious thought and self-reflection, but this is the only way for you to apply it into your decisions.

Much of what you’ll have to deal with depends on what you act on today.

Is it going to be for your own good?

Or are you going to look for a petty excuse?

Which among angel number 949’s meanings spoke to you the most? Let us know!