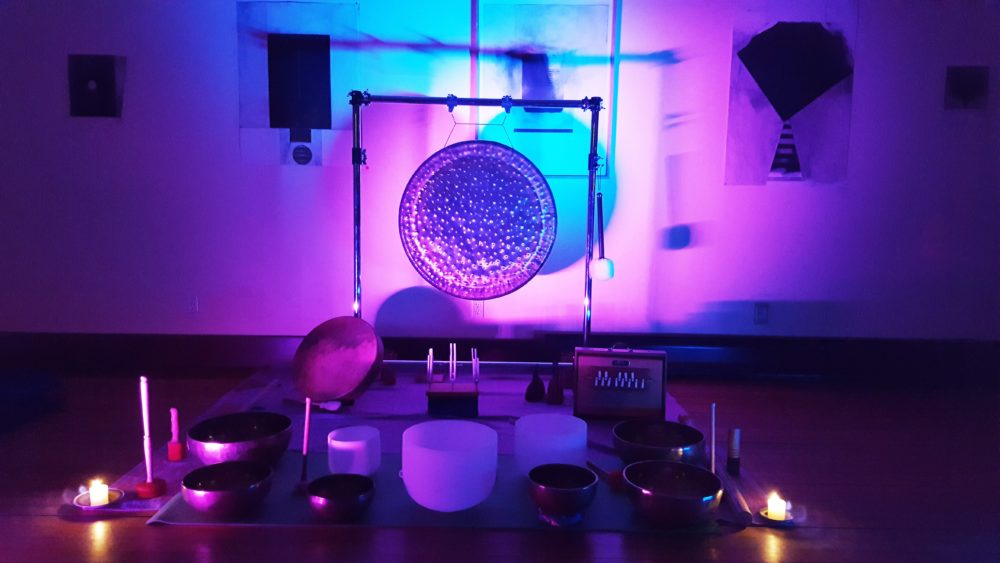 Generally speaking, sound meditation is a practice that unlocks both the conscious and unconscious thoughts that we have. By doing sound meditation, we allow ourselves to be open to the infinite possibilities that our minds can process. This can be achieved through sound baths.

As such, people nowadays often pursue sound baths and sound meditation as alternative ways of healing.

Through this practice, they are able to deal with their idle thoughts, allowing them to sift through the unnecessary ones.

With that, sound meditation is often perceived as a rational mental activity.

By pausing and focusing on what’s going on in one’s head, one can carefully assess which ideas are causing discord.

In the same way, one can also pinpoint those that are beneficial and thus must be developed.

However, did you know that sound meditation can also be done intuitively?

Yes, being a spiritual practice in itself, meditation is something that can also be processed with one’s intuition and spiritual connection.

As such, higher forms of meditation include methods like – healing crystal meditation, nature meditation, and even chakra meditation.

With that, one form of meditation that we’ll be exploring in this article is sound meditation.

By laying out a basic grasp of this topic, we hope to enlighten you about how to do meditation and execute it.

What is Sound Meditation?

As the name suggests, sound meditation is the way of doing meditation through the process of immersing oneself into music.

Through this method, we are essentially using the power of sound and how it can help us manipulate our own reality.

But more often than not, sounds are an under-appreciated sensory function.

Because we often associate movement with vision and kinesthetics, we often take sound for granted. Yet, in reality, the sound is a defining sensory perception.

For instance, if ever you’ve tried one of the best noise-canceling headphones like the Bose NCH 700 or the Sony WH-1000XM3s, you’d know what I’m talking about.

As these headphones trap sound through vacuums, the moment you put them on, you’ll feel like you’re in a totally different world.

Applied spiritually, this concept means that we’re going to take advantage of sound meditation as a way to manipulate our own thoughts.

By immersing ourselves in the proper tunes and frequencies, we hope to emulate a kind of intuitive and spiritual response in ourselves.

Doing sound meditation is not simply listening to some trap soul kind of playlist.

Instead, it involves a specific and precise way of doing things that will emit a certain response in us.

By making sure that we are using the correct methods, our whole meditation process is properly executed.

Originally emerging from the 6 basic notes mentioned above, some New Age spirituality believers claim that this has a healing effect as follows:

417 Hz – for undoing one’s past actions and facilitating change

528 Hz – for miraculous healing and transformations such as DNA change

639 Hz – for connecting/reconnecting with people or relationships

741 Hz – for expressing oneself especially in situations which require solutions

852 Hz – for the opening of one’s spiritual self

By listening specifically on these particular hertz emitted by the Solfeggio frequencies, we are able to achieve the particular kind of healing that we want.

As each frequency is assigned to a specific function that’s derived from a series of pareidolic calculations, such sounds are considered sacred and ancient.

Thus, with its long history, it gains some form of ancestral validity, something that transcends all cultures and situations

Considered as a universal unconscious practice, tuning to Solfeggio frequencies gives us a certain edge in understanding ourselves.

What Is A Sound Bath?

A sound bath is a sound meditation technique that essentially allows listeners to cleanse themselves through the use of sound waves such as Solfeggio frequencies.

These sound waves can be projected through our vocal cords or the use of various instruments that resonate at specific frequencies.

The use of instruments in sound baths typically involves singing bowls, gongs, chimes, and many others, with the most widely used instrument being the trusty tuning fork.

As two of the most crucial ways in executing sound mediation, tuning forks and sound baths are the go-to methods of beginners and experts alike.

Given that these methods are known to have produced stellar results, practitioners subscribe to such.

Formed as a two-pronged metal, this musical device can produce the sound that we need in order to produce the particular hertz that we want.

Given such, tuning forks and the production of sound is often coupled with sound baths.

While you may visualize this as experiencing the sound frequencies while lying on a bathtub for hours, such is not the case (although it can also be, given that you have solfeggio healing master with you).

Instead, sound baths are solo or organized sessions of immersing oneself into these series of frequencies.

By allowing yourself to be drenched in this sequence of sounds, you are already healing your own self in the process.

As such, the best way to go is to google a sound bath near you. Given its rising popularity, it shouldn’t be difficult to find one, especially if you’re residing in a big city.

With people sharing the same passion, you’ll be able to experience the healing effect in no time!

Given the points that we’ve mentioned above, we hope to have imparted a sufficing understanding of sound meditation and sound baths.

In this article, we’ve kept it simple and easy since sound meditation and sound baths, at the end of the day, must be experienced instead of conceptualized.

Thus, in order for you to truly experience its harmonic effects, putting your learnings into action is the best way to go!