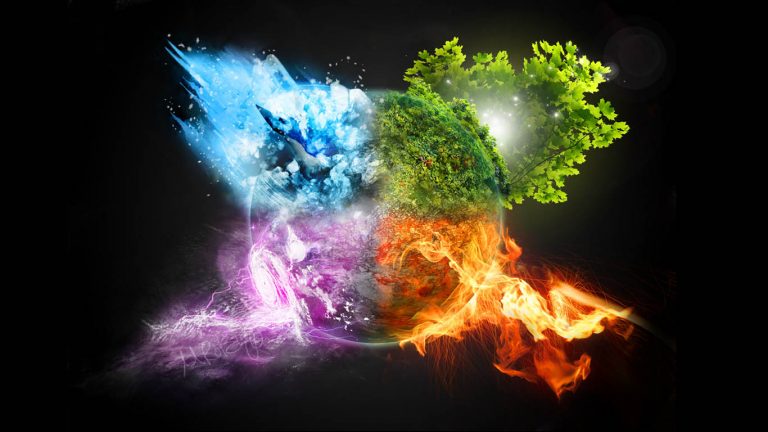 There are 4 zodiac sign elements: Fire, Earth, Air, and Water.

In this guide, we’ll be looking into the zodiac sign elements (as well as their modalities).

You’ll understand what the zodiac sign elements are, and how their modalities affect the 12 zodiac signs.

The four zodiac sign elements are based on a few fundamental qualities, which allows them to bear their own value.

There are three zodiac sign modalities: cardinal signs, fixed signs, and mutable signs. Depending on where they belong, they’ll possess certain attributes that allow you to identify how they will execute things.

Bearing both the Cardinal and Fire zodiac sign element, Aries is known to be the most enthusiastic starters out there.

Fearing almost nothing at all, their adventurous personality allows them to conquer their own fears in life.

As leaders in their own right, they lead from the front without any doubt or hesitation.

Their pure energy moves others to follow suit, pulling in individuals who have the same vision as theirs.

Embodying both steadfastness and stability, this, perhaps, is the most patient of all signs.

Such patience causes them to be either lazy and/or stubborn.

Despite this, Taurus is still the most stable and reliable of all zodiac signs.

The earth element is a soothing presence that affords other signs a sense of security and confidence.

The Taurus zodiac sign finds meaning and comfort reality. It is known to provide safety and security to anyone.

Being the first mutable and Air element in the series, they are the most unpredictable of all signs. Just look at the twins representing Gemini, and you’ll know what I mean.

This unpredictability allows them to fully draw on the creative powers the universe affords them.

While they embody intelligence, their mutability makes them quite unstable, often leading them to be misunderstood.

However, they themselves, as mutable signs, are definitely comfortable with the changing winds.

The Cancer sign is highly intuitive and can thrive on both land and sea.

Cancer signs are able to use emotional and spiritual powers to perceive others and situations around them.

This allows them to be the connect all the other signs. They are capable of understanding the Fire element’s innate aggression, the Earth’s unflinching resolve, and the Air’s whimsical nature.

As a Cardinal sign, such intuition allows them to capitalize on new trends and explore the unexplored.

This translates to Leo being authoritarian as they yearn for stability and power (both fixed and fire qualities).

Like the king of the jungle, Leo finds meaning in leading others to the path that they perceive as right.

However, this can also cause Leo to be highly inflexible. Which means other signs must be willing to take on an advisory role to prevent the Leo from being too tyrannical.

Represented by the Maiden, which symbolizes farming and prosperity, Virgo is a unique sign where mutability and worldliness combine.

As such, they often yearn for worldly pleasures by making themselves stable while being comfortable with change.

This also makes them highly intelligent and perceptive of the world and everything in it, especially humanity. The ability to stretch out across multiple parts of a spectrum makes Virgo such a powerful asset to anyone’s life.

Just like how crops allow us to sustain ourselves all-year-round, they know how to prepare for things and adjust accordingly.

Literally the wind of change, Libra embodies cleverness and swiftness. Libra is action-oriented because of its Cardinal qualities. It executes quickly, knowing how pacing matters.

Libra knows how to create the best outcomes by looking at the odds.

Their presence is also refreshing, as they radiate an aura of certainty. This is rare even for all the other signs. They may change multiple times, but the core parts of their personality will stay the same and strong.

This justifies their love for balance, something that stems naturally from the Air zodiac sign element and cardinal modality.

This sign is capable of perceiving the depth of others’ feelings while serving as a unifying beacon of stability.

All other signs can relate to and take comfort in Scorpios.

As such, they are often the most emotionally sensitive signs. This might seem like a negative perception, but Scorpio actually possesses a deeper understanding of themselves and others.

Their emotions can sometimes get the best of them.

However, such power also allows them to resonate and truly care for people around them. Scorpios are always helping others to avoid their own emotional traps in the process.

Sagittarius belongs to the Fire element the Mutability modality. It is often depicted with the archer symbol.

Like the archer symbol, one must possess creativity, accuracy, and adaptability in order to hit their targets.

They possess an inherent emotional fervor and truly have a drive for the hunt.

Their accuracy means nothing gets away, and their precision indicates consistency in their inclination to creative excellence.

This makes Sagittarians thrive with creativity and change, something that allows them to harness both powers in complementing ways.

Just like the symbol of the Sea-Goat, Capricorn represents the ability to tread both material and emotional realms.

Capricorns are highly practical thinkers. They have an inherent understanding of cost and benefits, helping them grapple with the ethical ramifications of their actions.

They are goal-driven and will not sacrifice or see people as pawns in what some signs would call the “game of life.”

Unlike the bull or the Maiden, only Capricorn represents this ability, sparking their cardinal qualities.

Even then, Capricorns still maintain a strong desire for progress and pleasure.

This can be seen when they become committed and driven to achieve their goals.

As a Fixed sign, Aquarius is fixated with its own abilities. Relying heavily on reason and logic, they are often assertive to the point that they listen only to their perspectives.

This gives them an air of detachment that is typically associated with ivory tower thinking.

While Aquarius might have the best perspective, their inability to adapt to others’ perspectives makes them difficult to work with.

Their pride tends to eliminate all prospects of teamwork.

Even then, it takes quite a challenge to notice this, given their likeable and charming personality.

Pisces is regarded to be the wisest zodiac sign. True enough, their being a season-ender means that they have accumulated such knowledge and integrated it in their own dealings.

They often know life’s darkest intricacies and greatest joys. The extent of this wisdom make them a fountain of reason and understanding for all other signs.

Pisces is the wisest of all the zodiac signs, allowing them to use their intuition to become closer to their spiritual self.

Their vast knowledge of the world’s inner workings does make them more emotionally vulnerable.

So trying to cheer them up might be a challenge.

We’ve covered the 12 zodiac sign elements and their modalities.

By looking into the elements and modalities of each zodiac sign, we become more aware of each sign’s thoughts and behaviors.

We hope that this guide has contributed well to your understanding each of the zodiac sign elements, along with their modalities.