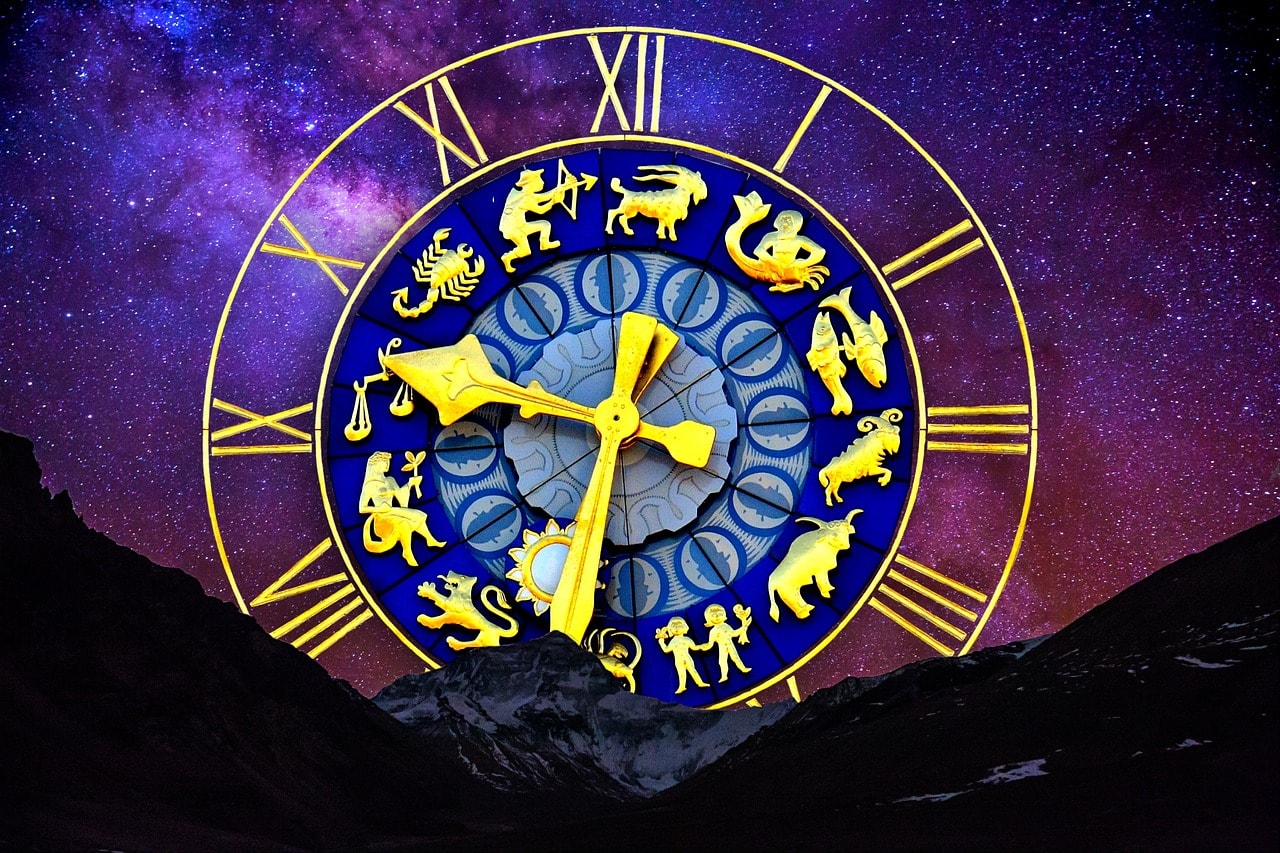 Before we proceed, here’s a short cut to Astrological Chart Reading Part 1!

In our previous article (part 1) we discussed the essential elements of the astrological chart so that you will be able to read anybody’s chart and get a general overview of their personality and what they are dealing with. We also took a brief look into cardinal signs, mutable signs, and fixed signs.

In this article, we discuss how to get a birth chart for free, how to look at it to find out where your sun sign, moon sign, ascendant and ascendant ruler falls and also how to translate the meanings into something that will give you great insight into your ‘self ’ or simply, the important elements of birth chart.

How to get your birth chart for free?

The first thing that you need, to learn more about your astrological destiny, is to obtain a birth chart. It’s possible to calculate the birth chart yourself, but that’s advanced astrology, in fact, the chart is formulated using a series of mathematical calculations which is how it’s possible to read an astrological chart in the first place and for this purpose, we’ll just let the computer work it all out for us!

This software is used by professionals and amateurs alike and is credible, although there is plenty of other astrological software available.

All you need to do to get your birth chart is enter your details, and the software will create your chart for you. You don’t have to supply your email address if you don’t want to (even though it asks for it) and if you want to export to PDF you’ll have to pay, but you could take a screenshot quite easily.

The information you’ll need is:

If you don’t know the time of birth it’s possible to tick the ‘I don’t know button’ however, the less information you provide, the less accurate the report will be.

The chart may look complicated, but when you know what to look for it becomes much easier.

This is what the astrology report will look like.

At the bottom of the chart, you’ll see a key which shows the symbols for the planets and signs.

Next, you’ll need to identify where the houses of the astrology wheel are, and where the ascendant is so that you can find the orderly progression of the houses and find your rising ascendant. Once we’ve identified this, you’ll need to understand the symbolic and energetic meanings of the houses, signs, and planets so that you can put it all together and make sense of the astrological chart (these meanings will be discussed in the next chapter).

Here’s an image which points out the positions of everything that you need to find on the astrological chart. 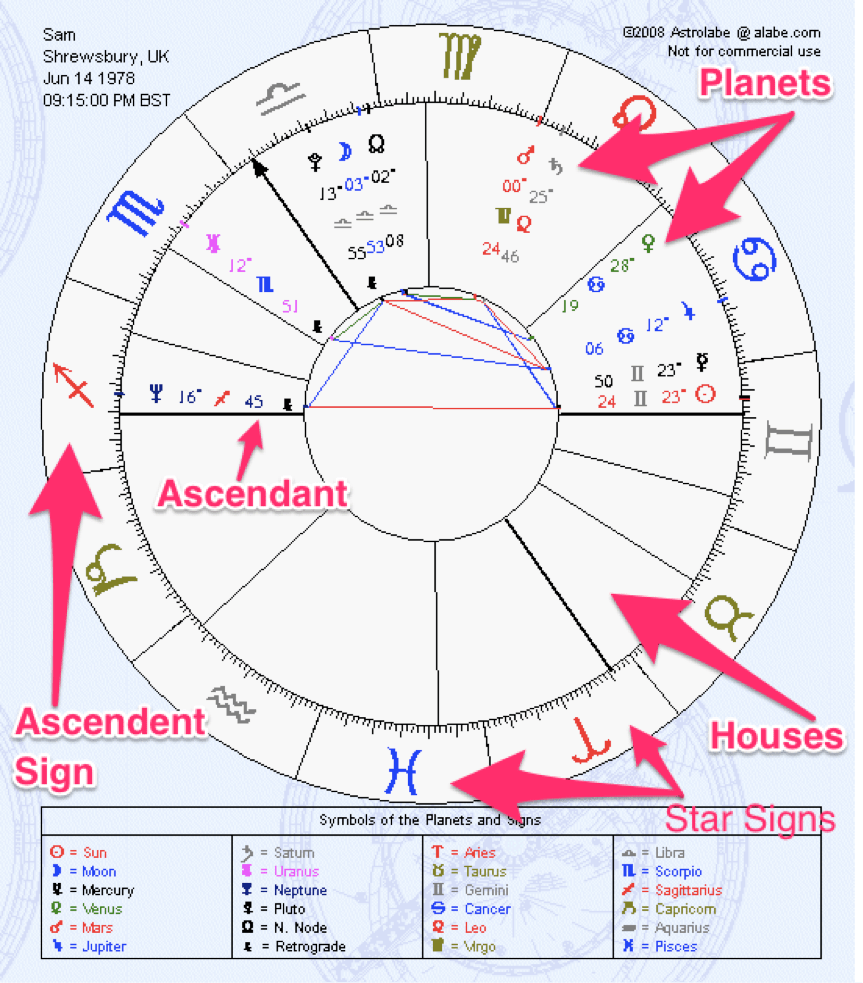 The opposite line to the ascendant is always the descendent line, and in ancient astrology, this was a critical aspect of our astrological profile.

In the example above the astrological star sign for this birth chart is Sagittarius and the ruling planet for Sagittarius is Jupiter. Therefore this particular chart will have much influence from the planet Jupiter and will be subject to plenty of expansion and excess in their life.

But because Jupiter is a slow mover (taking around 12 years to make a cycle), you can expect Jupiters qualities to take time to manifest. Which could be a great thing, or not so great, depending on what aspects of Jupiter this person is experiencing.

There are twelve astrology houses in total, six fall below the ascendant lines and six fall above. In some astrological systems the houses will appear to be equal on the chart, and in some charts, the houses won’t look identical in size. As you can see from the image we’ve attached the houses are not equal.

The reasons for the differences in house sizes on a birth chart are more advanced and for learning to read an astrological chart not really necessary right now. What you will need to know though is what the purpose of the houses is, and what they all mean, which will be addressed in the next part of this series.

Remember that the houses never move in an astrological chart, no matter who’s chart you study the houses will remain in the same position (but will just be reversed depending on whether the place of birth was in an Eastern or Western location).

The first house starts just under the ascendant line, and all-star signs move in a counterclockwise direction around the houses.

In the example above you can see that there are no planets or any activity at all in the first six houses. Which means that as a primary analysis a person with this chart will probably not find themselves having to focus too much on the influences or challenges of the first six houses, but then will be busy in the final six houses.

But this could also mean that they don’t or won’t think to pull on the resources from the first six houses to help them solve the challenges they might face in the last six houses.

The example above is an interesting birth chart concerning placement of planets – at least from my perspective it is.

The star signs move slowly over the course of approximately 30 days around the houses, meaning that over the space of twelve months, the influence of each star sign can be felt in your different houses, as they spin around them.

The star signs are always ruled by a specific planet which helps to understand the personality, opportunities, strengths, and weaknesses or challenges that a particular star sign and planet bring.

And again, in this particular chart, there is no activity in five of the star signs at the time of birth (Capricorn, Aries, Pisces, and Taurus) which can be quite telling when you start to read the astrological chart.

The difference with the planets, compared to the houses and star signs is that all of the planets will be relevant in a birth chart. Whereas you could say (if you weren’t aware of shadow work, and were not considering advanced astrology – which we are not) that the houses and star signs in the example above are not really relevant to this person because there’s no activity showing.

In the next part, we will discuss the meaning of the houses, and the planetary rulers for each star sign, along with the influence and meanings of the planets.

Michelle is a personal development and spiritual content writer and blogger. She previously worked as a Hypnotherapist, and NLP Master Practitioner and has studied human behavior and ‘things’ of an esoteric nature her whole life. Her passion for helping people to attain joy, peace, and happiness through all aspects of personal development and through simplifying life flows through in every piece of work she does.